Activities at the Iranian Embassy in London were on Friday paralysed by angry Nigerians over the alleged involvement of the Asian country in the protests and actions of the Islamic Movement in Nigeria, otherwise known as Shiites. 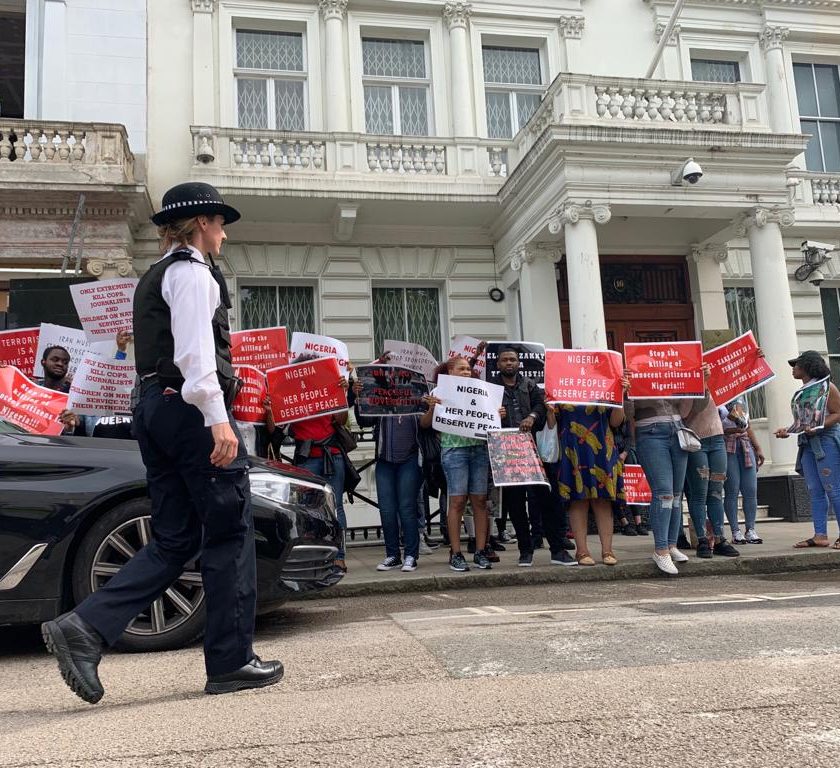 The protesters, under the aegis of Concerned Nigerians in the United Kingdom, were seen chanting songs and displaying placards with various inscriptions, warning Iran to stop sponsoring terrorism in Nigeria.

The action came following the demand by the Iranian government for the release embattled Ibrahim El-Zakzakky for treatment in the middle east. 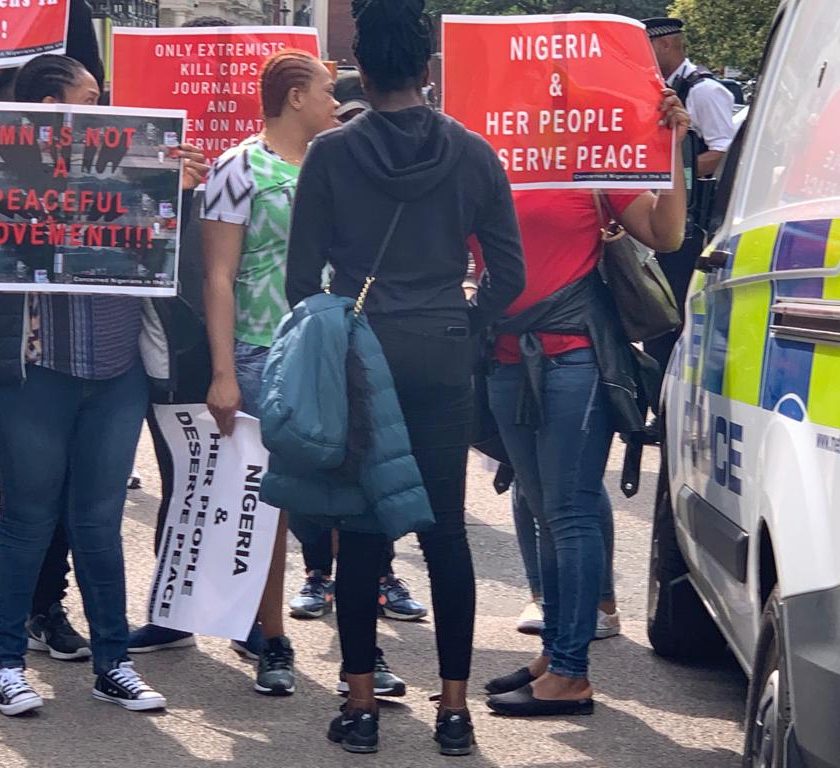 Addressing the protest on behalf of  Concerned Nigerians in the United Kingdom, Callistus Abah, demanded that the Islamic Republic of Iran  immediately stop its sponsorship of and support of IMN or risk being brought under international pressure from Nigerians living abroad. 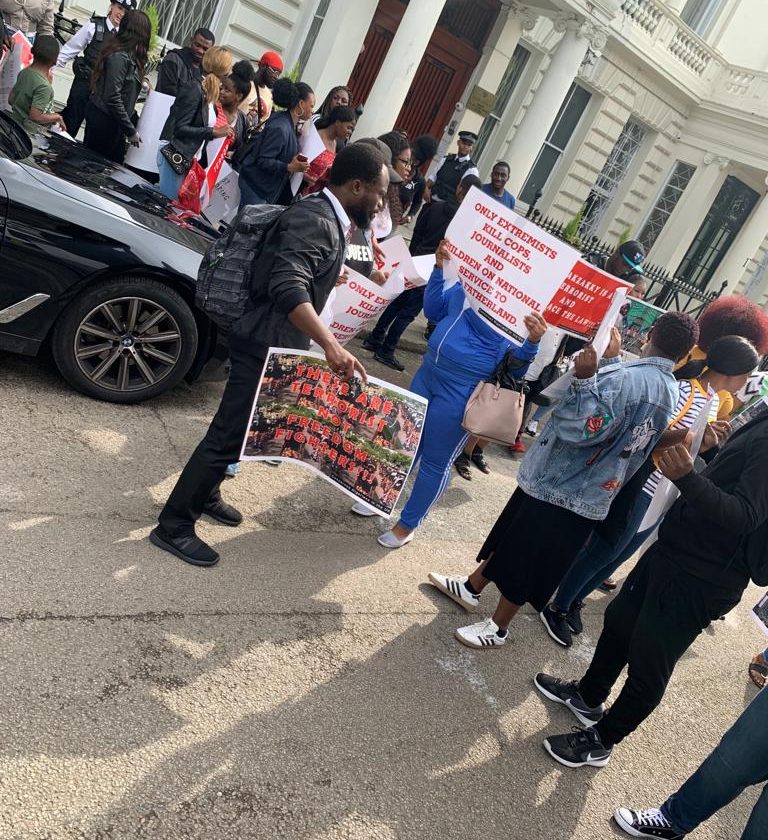 Full text of his speech below.

Concerned Nigerians in the United Kingdom have been following development in Nigeria with concerns. The concerns arise from the rapidity with which Shia group, the Islamic Movement in Nigeria (IMN) has evolved into a full blown terror group, a development which security experts and organizations in our home country have attributed to support from the Islamic Republic of Iran.

In the month of July alone, IMN members, reportedly radicalized by Iran, have precipitated two major incidents in the capital, Abuja. The first was the invasion of the National Assembly of the Federal Republic of Nigeria, during which they attacked policemen on duty in targeted shootings. Several policemen were hospitalized afterwards for gunshot wounds while at least two persons died. In the second incident a few days later, a senior police officer – Deputy Commissioner of Police, a journalist and other innocent Nigerians were executed by IMN members during another of their protests.

The weak attempts at self exoneration by IMN leaders are noted.  They have repeatedly claimed to be harmless protesters but the gunshots that killed the referenced victims attests to a group that is not only harmed with firearms but one with members with sufficient knowledge and training to use them. This training, and the weapons, came from somewhere and Iran is the direction that the accusing fingers point.

Let us remind you at this point the several utterances of a former Iranian Ambassador to Nigeria, Saheed Koozechi,who in some instances warned that Nigeria will regret not allowing IMN the freedom to be lawless. He hinted at those times, before he was recalled, how Iran was supporting IMN as a matter of sectarian interest but it was considered the manifestation of flippancy. We now know better.

The strategic interest behind such meddlesomeness is something that we had previously found to be bizarre. The picture is however taking on some clarity now that we see the belligerent attitude of Iran towards the rest of the world. We are aware that Iran is presently desperate for distractions that will keep the world busy looking elsewhere while it perfects it’s nuclear weapon programme. IMN terrorism taking over Nigeria provide both the needed distraction and giving Iran a foreign Shia territory at the same time.

As clever as this strategy appears we know it is one that will cost Iran dearly. Nigerians and their country is not helpless. We know the route to take to neutralize any proven Iranian interference in Nigeria. Our protest march in London, United Kingdom is only one of the violence and terrorism-free approaches we are adopting to pressure your country to let Nigeria be. The unholy activities of the IMN in Nigeria must stop now! Iran has a role to play.

The basis on which IMN members are unleashing terror on Nigerians remain unjustifiable. Their leader, Mr. Ibrahim El-Zakzaky, whose freedom from detention they are demanding is being held on the order of a competent court in Kaduna State in the north of Nigeria. A judge has continued to hear his case and would have protested had he ruled for him to be released and the contrary is done.

Equally, if an accused secures five court rulings that ask for him to be released while one other court declines him bail then he stays in custody on account of that one Court’s position. It is therefore confounding that IMN leaders brainwash their members into believing that their leader was being unfairly held and can be freed by terrorist acts instead of due process of the law.

Assuming Iran has no connection with the acts of terrorism by IMN members, your country has not done enough to distance itself from claims that it is responsible for IMN’s irresponsible behaviour and acts of aggression. The group’s leaders have repeatedly enticed members to be violent citing Iranian support in assuring these hapless members that they will escape repercussions with your country’s support. On the strength of this advertised Iranian support, IMN members have demonstrated that they are terrorists.

We hereby demand that the Islamic Republic of Iran  immediately stop its sponsorship of and support of IMN or risk being brought under international pressure from Nigerians living abroad and they happen to be strategically placed to do so.  Where Iran wants to deny complicity in the macabre acts playing out in Nigeria it still has the responsibility of coming out to renounce IMN’s preference for terrorism instead of allowing the law to take its course in Nigeria.

Let Iran know that the days of diplomatic brigandage are over. Nigeria is not its testing ground.

It is our sincere belief that these demands would be communicated to your home country undiluted and that we will see a discontinuation of Iranian tacit or direct support for terrorists in Nigeria.
Accept the assurances of our best regards.