Skip to content
You are here
Niger State Governor, Abubakar Sani Bello, has lauded the efforts of his counterpart in  Akwa Ibom, Governor Emmanuel Udom
at the development attained in the state.
Governor Sani Bello gave the commendation when he commissioned the Eket township stadium as part of activities marking the 35th years of the creation of the state. 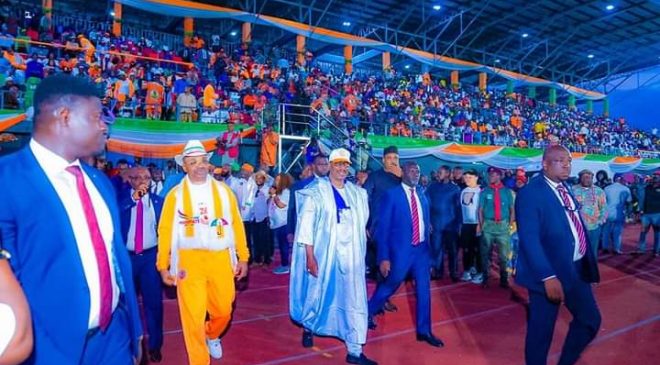 He acknowledged that his counterpart has demonstrated hardwork and commitment to service delivery to the people.
“You have converted Uyo to mini London, I know it is not easy but your commitment, dedication and  promise to the people of Akwa Ibom ,you have fulfilled.
“I cannot , but thank you for showing a good example as a leader”, he said.
Governor Sani Bello noted the  great difference between the present Uyo compared to the past ,owing to the judicious use of resources by the Governor in infrastructure, education, sports among others areas of development.
He congratulated Governor Emmanuel for the landmark achievement, and expressed optimism that the stadium would be used for the benefit of the people of the state.
“This fantastic stadium built in record time,  I am  sure will encourage young boys in the community to engage in football  as well  produce more and more quality footballers”, he said.
A novelty Match was thereafter played between Akwa United Football Club and Katsina United Football Club which ended 2 goals to 1 in favour of the host state.
Akwa Ibom and Katsina states were created by the former Nigeria  Military President, General Ibrahim Badamasi Babangida Rtd. in 1987.
While Akwa Ibom was carved out of Cross River state, Katsina was created from Kaduna State.
Also present at the event were Governor of Oyo State, Seyi Makinde and former Governor of Katsina state, Ibrahim Shema