An act of kindness rendered to a robbery victim by the Divisional Police Officer (DPO) of the Ogudu Police Station in Lagos was on Monday rewarded by the Lagos State Governor, Mr. Babajide Sanwo-Olu, who personally invited the kind hearted police officer to the State House for an honour.

Sanwo-Olu described Mrs. Celestina Kalu, a Superintendent of Police (SP), as “a humane police officer”, saying her decision to save the life of an orphan, Friday Ajabor, shot by a two-man robbery gang in Ojota, was a “matchless trait of compassion”.
Ajabor, a 25-year-old orphan from Edo State, was at the Ojota with his friend at about 8pm on September 19 when two men of the underworld waylaid them, attempting to dispossess them of their valuables.

They struggled with the robbers, until the assailants overpowered them.
Ajabor’s friend managed to escape from the scene with their personal effects, leaving him at the mercy of the robbers armed with a local pistol. For struggling with them, the robbers shot Ajabor in the bowel at a close range and disappeared from the scene. 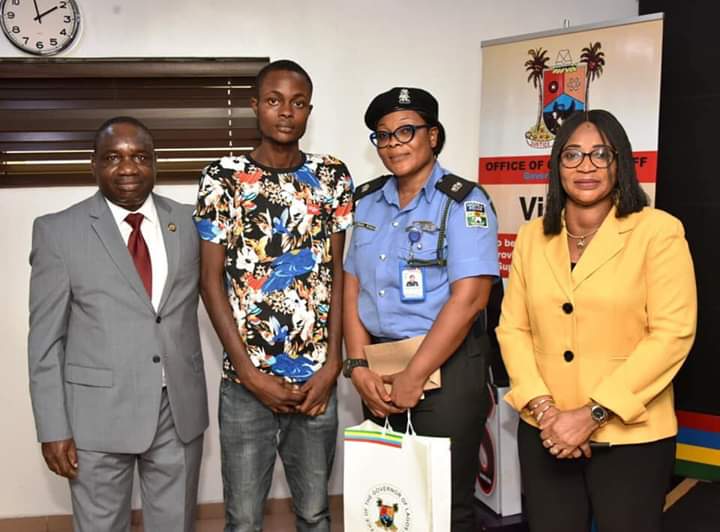 A team of policemen from Ogudu Police Station led by Mrs. Kalu arrived at the scene about 30 minutes later, meeting the hapless victim in a pool of his blood. The policemen, it was learnt, rushed the victim to two hospitals where he was rejected for lack of bed space.
About 90 minutes after, the victim was admitted in the Intensive Care Unit (ICU) of the Lagos State University Teaching Hospital (LASUTH) in Ikeja, where he underwent a series of surgery, the cost of which was personally defrayed by Mrs. Kalu.

This extra effort by the police officer saved the life of the orphan whose relatives could not be reached at the time he was admitted into the ICU.
The DPO’s act of kindness caught Gov. Sanwo-Olu’s attention after it went viral in the social media, prompting the Governor to reach out to the policewoman and the victim.
While honouring the DPO, Sanwo-Olu said Mrs. Kalu went beyond the limit of her official duty to save the life of the robbery victim, stressing that the policewoman’s effort was “the essence of public service” and “a true spirit of Lagos”.

The Governor said the policewoman demonstrated a rare example that should be emulated by every Lagosian, urging security operatives not to fall short of such act of kindness in the discharge of their duties to the citizens.

Sanwo-Olu said: “I am personally amazed by this rare act of kindness displayed by Mrs. Celestina Kalu, who went beyond the official call of duty to save the life of a citizen using her personal resources. This is one of the essences of governance and public service when you have public officers going beyond the call of duty to render a helping hand to a fellow citizen.

“This is a rare trait of compassion by the DPO. We usually don’t get to witness such act of kindness, because everyone of us is too overwhelmed by myriad of personal challenges. When we see law enforcement officers giving us reasons to be kind, we need to appreciate and recognise such action.

This is why we are honouring Mrs. Kalu this morning as our role model. This will encourage others to emulate this act of kindness.
“Not only that she stopped to help the victim at the point of death, she also went ahead to make financial commitment that ensured immediate treatment of the victim at the hospital. We are happy that this effort paid off, because the victim is alive and he is recuperating well.”
Sanwo-Olu presented a special plaque bearing the official seal of the Lagos State Government to honour the DPO, while also taking over the cost of Ajabor’s surgery.

The Governor urged security agencies to scale up their surveillance across the State, urging inter-agency collaboration to rid Lagos of robbers and criminals.
Commissioner for Information, Mr. Gbenga Omotoso, said the honour done to the DPO was the prize of her compassion, pointing out that such act of kindness was in tune with spirit agenda of ‘Greater Lagos’ campaign of the present administration.

Omotoso urged Lagos residents to emulate the act, saying the State would improve in its social index when people show their fellow citizens unsolicited kindness.