The four-day Hajj and Umrah 2023 exhibition commenced in Jeddah Saudi Arabia on Monday with over 400 exhibitors on various aspect of Hajj and Umrah services in a colourful display of their goods and services.

The Saudi Arabian Minister of Hajj and Umrah,Tawfiq Al-Rabiah, in company of other stakeholders were seen inspecting the various stands of 2023 International Hajj exhibition holding in Superdome, Jeddah. 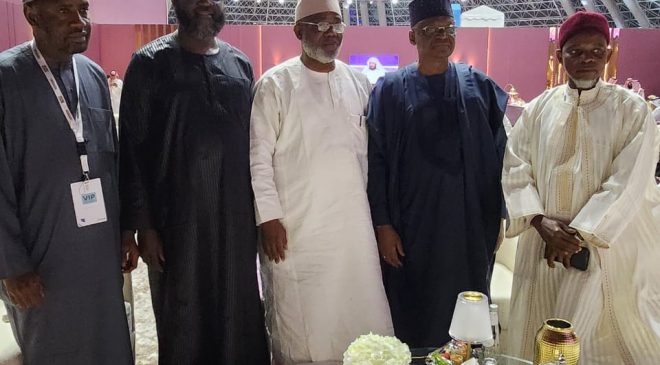 The exhibition dubbed: Hajj Expo 2023, was under tight security checks due to the presence and attendance of high profile government functionaries from the Kingdom of Saudi Arabia as well as Very Important Personalities that graced the occasion.

The delegation also witnessed the formal opening of the exhibition by the Governor of Makkah, Prince Khaled Al-Faisal and the discussion sessions led by Sheikh Abdur-Rahman As-sudais, the prominent Chief Imam of Makkah, amidst other stakeholders , Scholars and exhibitors all over the continents.

Earlier, the Saudi Arabian Minister of Hajj and Umrah,Tawfiq Al-Rabiah, gave a welcome speech where he justified the rationale for the holding of the International Hajj Expo in the Kingdom.

Ambassador Dada, Alhaji Hassan and Hon. Nalaraba later went round some exhibition stands and met with some major Exhibitors.

In an interview, Alhaji Zikrullah Hassan said the expo could not have come at a better time than now when Information Technology and Innovation is ruling the world and determining the pace of development.

He said NAHCON under his watch would live up to the expectations to meet up with the global needs and allign with the vision 2030 of Kingdom of Saudi Arabia on hajj related matters.

He assured Nigerians, especially Muslim pilgrims, of excellent 2023 Hajj and Umrah services as all the stakeholders have been mobilised for synergy and effective service delivery.

Other highlights of the conference include discussions on a wide range of themes relevant to the development of services for guests, logistics, transportation, crowd management operations, housing and hospitality services, catering services, visa procurement, insurance, facility and service management, safety and health care, and enriching pilgrims’ overall spiritual experiences.