Skip to content
You are here
Spread the love
Muslim leaders has been charged on the need to join hands with relevant agencies in the fight against corruption in Nigeria.
The Muslim Ummah gave this charge at the public presentation of a book titled’titled : “Sermon Guide for Imams” yesterday,Thursday 14th October, 2021, in Abuja.
The book published by an Islam faith based organization,Just Foundation of Al-habibiyyah Islamic Society with the support of MacArthur Foundation is focused on  Accountability and Transparency for  religious leaders especially the Imams , on how Islamic clerics can imbibe lifestyle that is free of corruption and other societal ills.
In his opening address,the Executive Director, Just Foundation,Dr.Fuad Adeyemi said: “Insha Allah, we are unveiling a new project EAT-HALAL.This project is a continuation of our previous project,Eat-Fin Encouraging Accountablity and Transparency through Faith-based Intervention supporied by MacArthur loundation,which was launched in 2018.
“Through the project we empowered and educated the Imams and other Islamic Clerics with the right information on the danger of corruption and how to speak against such human induced problem called corruption using their divine mandate and influence on their congregants
“That project Eat-Fin was indeed first of its kind that deliberately and systematically enrolled influential religious leaders in the fight against corruption. We envisioned at that unless and until religious leaders take the front stage n the fight against corruption in
Nigeria, the nation might just be probing endlessly without positive results.
“We believe strongly that government alone cannot succeed without the input of religious leaders, who
command respect and followership across the larger citizenry
“In the past 3 years the project covers six states which includes FCT ,Kano,Kaduna, Lagos ,Osun and Kebbi sates, However, in our new project EAT-HALAL,we have added 2 more states (Sokoto and Enugu) to be part of this intervention for us to interact and interfaced with Imams and scholars with deeper discussion concerning corruption and its negative impacts in our society and need to reducing it.
“However, this interface provided the data, added information with which we produced Sermon Guides which we shall be launching today
“We also began a 30-minute radio program Be Just Human Rights Radio which airs every Friday at 12.30pm with the sole focus on enrolling more Nigerians into the fight against Corruption. That programme is an interactive one which takes listeners and  Interestingly the subtle non apparent acts of corruption like going late to work, reducing measure in the market, and inflating prices during scarcity are among many issues
discussed and responses generated.
“These things that appear to be accepted as a norm and many people don’t consider them acts of corruption.
“One of the impacts of the programme in Kebbi was a scenario where one of the participants returned to a customer who had been buying grains from her over years, but whom she had been serving incomplete measures. After participating in our training, she was moved to look that man, she found him, now a retiree and facing hard times,and she supplied
different grains to him and asked him to forgive her for shortchanging him many years ago.
“We believe someone who went to pay back will no longer engage in such act  corruption because Allah has actually cursed those who cheat, please refer to Quran 33 verses 1-3
“In the name of God, the Gracious, the Merciful
1. Woe to the defrauders.
2. Those who, when they take a measure from people, they take in full
3. But when they measure or weigh to others, they cheat”
“These and many more are the reason why the project is continuing and still with Support
from the MacArthur foundation. EAT-HALAL .The call today is lor religious leaders to eat only things that are permissible and permitted as ordained and prescribed by Allah and His Holy Prophet Muhammad (S.A.W).
“However, because we have discovered that most of these Imams/Scholars cannot actually face some of their well to do or highly profiled members to say the truth about ill gotten wealth because they are afraid of losing their financial support or completely jeopardizing their source of income. Hence this new phase (project Hala) shall be primarily focusing on empowering our beneficiaries (Imams, Women, Youth, Scholars)on skills acquisition,trading and Farming for economic independent and self reliance.
“The next level of this project is to deepen that message on anti- Corruption and further the work on entrenching transparency and accountability i our society through the project now tagged EAT HALAL,Insha Allah ,we shall engage with scholars and religious leaders in a new interface that will help them be more economically independent of their congregants as earlier stated. 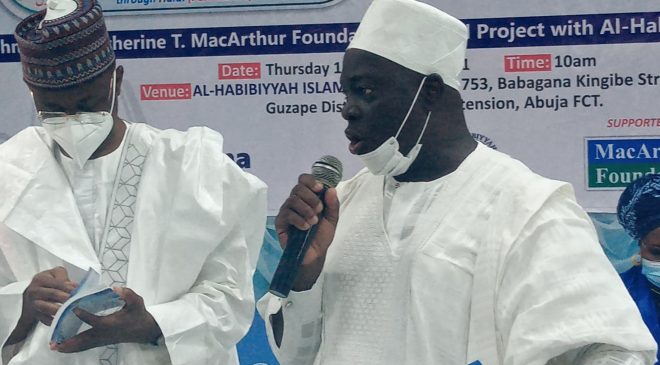 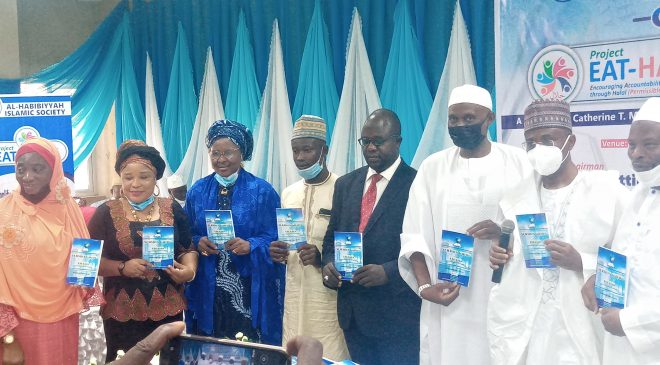 In a goodwill message the EFCC Head of Communications and Creativity,Mrs.Nwayimma Okewonu said Economic and Financial Crimes Commission EFCC was not established only to arrest and prosecute financial crime offenders but the commission also enlighten citizens on how to resist corruption.
“The only way we do it is to integrates everyone and we are working with what Al-habibiyah is doing here today,as to encourage Imams on how we can process that church/Mosque anti corruption antics because if you catch them all the mosques.
Mrs Okewonu commended Al-habibiyyah society efforts in the fight against corruption, especially in the area of public enlightenment.
Also in his remarks,the Assistant Commissioner ,Independent Corrupt practices and Other Related Offences Commission(ICPC),Hassan Salihu,noted that anti-corruption crusade is obedience to Almighty Allah’s instruction of enjoining the good and restraining the bad .
“Our deeds as servants of Allah (SWT)should be built upon absolute belief, fear of God(Taqwa)and doing righteous deeds.A believer in Almighty Allah(SWT) is expected to act only within the parameters set for him to operate by Allah(SWT).
Hassan Salihu added that absence of positive national value undermined the prospect for national development through large scale corrupt practices and poor adherence to ethical standard. He enjoined Muslim clerics and other Muslims to embrace National Ethics and Integrity policy and propagate it as religious obligation as it is in line with Islamic moral values
Also in her message at the event ,a Financial Expert and Founder,Enricher Financial Solution,Dr Shakirat Oriyomi,urged Muslims,especially those at the helms of  affairs to shun corruption and encouraged accountabillty and transparency in their endeavors.
She said Enricher Financial solution has developed very big opportunities for the Imams,Scholars and other Muslim to live worthy life in halal way. She then urged Imams and other Muslim Ummah to embrace Enricher financial packages.
” Enricher Financial Solution is an Halal platform, enriching people connecting people to opportunities in Halal way and of course, the whole idea is to ensure that people live halal ,people eat halal,that is why we are supporting the organizers of the event,Just Foundation to promote halal Lifestyle for the Muslims.
” At Enricher Financial solutions, we have packages that actually enable the Imams and other Muslim to acquire assets,pay in installments and making life easy for themselves.
“Typically, there are lots of Imams who they are not able to do other things beyond doing research and giving lectures on Islamic topics and issues,So Enricher is supporting the Imams to ensure that they have that platform that enable them to earn in Halal way, so that they are not at the mercy of the congregants, such as they are able to tell the truth and they able to do their lifestyle.