Skip to content
You are here
Spread the love
Kogi State Governor, Yahaya Bello has described the late Justice Moses Abu Bello as a legal giant in the law practice and advocacy across the country and beyond while he was also a respected community leader who served the people with the fear of God.
Justice Moses Bello was the pioneer President of the Customary Court of Appeal, FCT-Judiciary, a position he occupied for 21 years before his transition to glory at the age of 68. 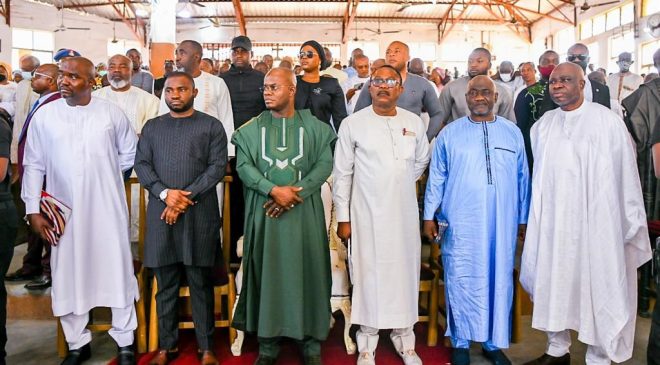 Addressing the congregation at the commendation service for the accomplished legal luminary at the Cathedral of Christ the King Catholic Church, Okene, Kogi State on Saturday, Governor Bello said the late Justice Bello was a top-flight legal officer, mentor and leader to a generation of members of the legal circle in the country.
“Late Justice Bello was a principled advocate of the law. A great man in legal practice who became President of the Customary Court of Appeal, FCT-Judiciary at the age of 39, in fact, he was an authority in the judicial practice in Nigeria. One thing that is known to all of us here about Justice Bello is that he was accommodating, relating with Muslims and Christians without discrimination and never forgot the culture of Ebiraland and her people. Justice Bello lived his life for the voiceless and downtrodden therefore, the most of all respects we can pay to him is to imbibe the elegant virtues the Jurist stood for”. Gov Bello stated.
While stressing that the late legal icon has left an indelible mark, Governor Bello enjoined the family members to keep the flag of the late legal icon flying as a way of preserving his legacies and assured them of his support at all times.
Governor Bello who was accompanied by his Chief of Staff, Pharm Jamiu Abdulkareem Asuku and other principal aides noted that late Justice Bello’s wise counsel has contributed to the great success his administration has recorded over the years.
Among other dignitaries at the service were the representatives of the Senate President, Speaker, Federal House of Representatives,   Senator Yakubu Oseni, Jibrin Isah Echocho and Smart Adeyemi of Kogi Central, East and West respectively. Others included, state Accountant-General, Jibrin Momoh, State Auditor-General Yusuf Okala, APC ag Chairman, Abdullahi Bello and others.
Justice Moses Abu Bello was laid to rest at his residence, Iniozomi, Okene, Kogi State according to Christian rites.