Skip to content
You are here
Spread the love
The Leadership of the National Assembly on Thursday met with the Minister of Finance, Budget and National Planning to be briefed by the latter on the plan by the Federal Government to amend the N10.59 trillion 2020 budget passed by the National Assembly in December last year.
The meeting which had in attendance principal officers from both chambers, was presided over by the President of the Senate, Ahmad Lawan, and the Speaker of the House of Representatives, Femi Gbajabiamila. 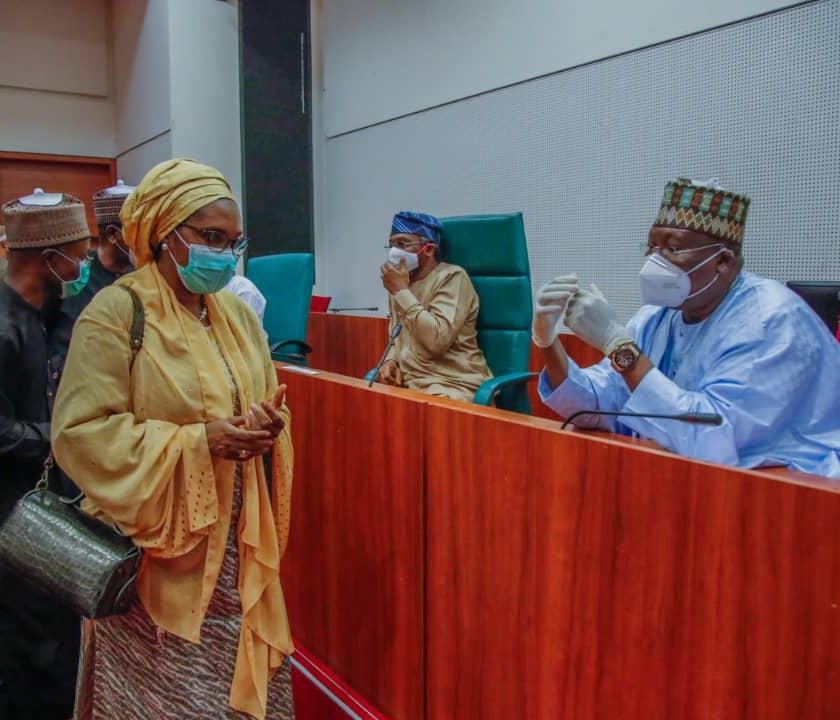 The Senate President, in his welcome address told the Executive arm of Government to ensure that the interest of Nigerians remains protected in the proposed cut to the 2020 national budget.
Lawan also expressed the willingness of the Federal lawmakers to expeditiously consider the proposed amendment to the 2020 budget which the Minister said would be presented to the National Assembly by next week.
“The budget amendment is very important, but I believe that when we are faced with this kind of challenge (COVID-19 pandemic), it is an emergency and we should do everything and anything possible to fast track the passage and implementation of the government intervention that is so critical and crucial at this stage.
“I believe that we shouldn’t delay it any longer. Next week, and I will suggest the early part of next week, we should have that document(MTEF) ready so that we can consider it alongside the budget. It is supposed to be the tonic of what Nigerians are waiting for.
“We have listened to the various adjustments you have made to avoid going into recession. However, to avoid going into a deeper recession, I think we need to do a little bit much more.
“After this meeting with the leadership, I suggest that you engage with our relevant committees in the Senate and House of Representatives to look at the nitty gritty that would be considered more in detail at the presentation level.
“On the whole, let me assure you that the National Assembly and Executive arm are on the same page, and that is to say that we will work to ensure that we have a budget 2020 amendment that will address the needs of the people of this country.
“One thing is that the net public expenditure must be targeted at net maximum performance for the benefit of the people of this country.
“In other words, we must come up with an amended budget that is operable and favorable to Nigerians,” Lawan said.
In his remarks, the Speaker of the House of Representatives, Femi Gbajabiamila, called on the Federal Government to adopt a feasible benchmark in the proposed amendment to the 2020 budget.
“The benchmark is so critical and so important, because once you passed the law, it becomes difficult to adjust that benchmark, and then what happens to the excess?
“We have always had problems with the Excess Crude Account, potentially an account which has no backing of the law. So, let’s even assume that the price remains static at $35, that means we have $10 going to the Excess Crude Account which we have no control over in terms of spending, that is why we guard that benchmark price very jealously.
“Is there a possibility of having a proviso built in in the budget…So that there can be an automatic kick in if the benchmark price goes beyond $26 or $27. We want you to explore that possibility.
“So, I think you should study the market and see what happens next week by the time you present the adjusted budget,” Gbajabiamila said.
Speaking on Nigeria’s debt profile, the Speaker said, “I would also want to address the issue of our deficit and tie it with the issue of debt relief. I’m not sure I heard any presentation on how much we owe and how much we are paying back in this budget.
“The reason I asked is that at the moment, I believe, for want of a better word, some of our creditors are very vulnerable right now. And depending on how you package your case, I believe they should be the ones coming to beg you to take debt relief, if not outright cancellation .”
Earlier, the Minister of Finance, Zainab Ahmed, while briefing the leadership of the National Assembly said, “the US$57 crude oil price benchmark approved in the 2020 budget is no longer sustainable.”
The minister said further that: “it is necessary to reallocate resources in the 2020 budget, to ensure the effective implementation of required emergency measures, and mitigate the negative socioeconomic effects of the COVID-19 pandemic. ”
Ahmed stated that in line with the global economic outlook and relevant domestic considerations, the assumptions underpinning the 2020-2022 Medium Term Expenditure Framework (MTEF) and the 2020 Budget was revised to slash crude oil benchmark price from US$57 per barrel to US$25 per barrel; reduce crude oil production benchmark from 2.18 million barrels per day to 1.9 mbpd.
She added that the federal government also adjusted the budget exchange rate to N360/US$1; and reduced the upfront fiscal deductions by the Nigerian National Petroleum Corporation (NNPC) for mandated Oil and Gas sector expenditures by 65 percent from N1.223 trillion to N424 billion.
She disclosed that the amount available for funding the 2020 Budget is now estimated at N5.548 trillion, down from N8.419 trillion, a revised revenue estimate which is 34 percent (N2.87 trillion) lower than what was initially approved.
Federal Government’s aggregate expenditure budget was slashed by N88.412 billion; Statutory Transfer from N560.47 billion to N397.87 billion; and Overhead costs of Ministries, Departments and Agencies of Government from N302.43 billion to N240.91 billion.
Debt Service provision was, however, increased from N2.453 trillion to N2.678 trillion.
On Provision of N500 billion for COVID-19 Intervention Fund, the Finance Minister in her presentation explained that N263.63 billion will be sourced from Federal Government Special Accounts, N186.37 billion from Federation Special Accounts and the balance of N50 billion expected as grants and donations.
According to her, “the sum of N186.37 billion will be applied toward COVID-19 interventions across the federation, while an additional N213.60 billion was provided in the Service Wide Votes for COVID-19 Crisis Intervention recurrent expenditures.”
She disclosed that while a total of N100.03 billion was provisioned in the Intervention Fund for new capital spending, the Federal Government carried out a cut in capital expenditures for Ministries, Departments and Agencies of Government from N1.564 trillion to N1.262 trillion.