Skip to content
You are here
Spread the love
Concerned by barrage of complaints by motorists and residents on the activities of the Abuja Municipal Area Council (AMAC) Taskforce/Marshal, the Nigeria Union of Journalists (NUJ) FCT Council has concluded plans to hold a town hall meeting with relevant stakeholders and residents. 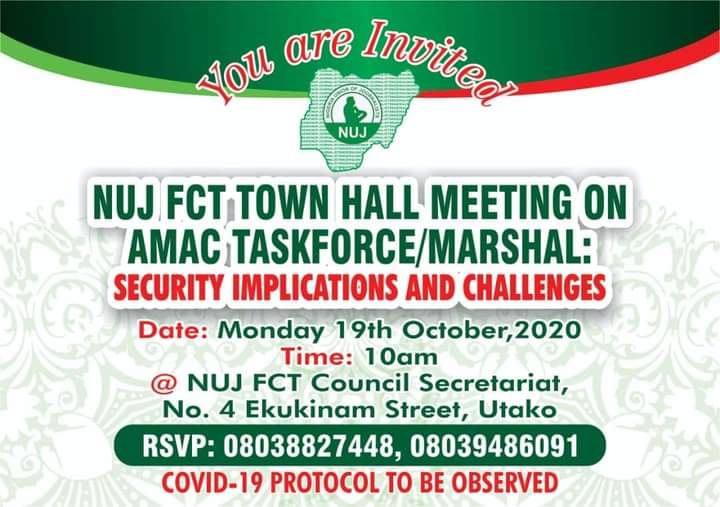 In a press statement released Sunday in Abuja, jointly signed by Secretary of Council and Chairman of the Planning Committee, Ochiaka Ugwu and Omeiza Ajayi, respectively, informed that the event will take place on Monday, October 19, 2020 at the NUJ FCT Council secretariat, Utako by 10am.
The statement noted that the town hall meeting became imperative following widespread complaints by motorists alleging abuse, extortion, intimidation and sometimes physical abuse by operatives/officials of the AMAC Taskforce/Marshal.
According to the statement, “Based on the Constitutional guarantee in Chapter 22 of the 1999 Constitution (As Amended) the NUJ FCT views it as expedient to organize a town hall meeting to review the strategies of the AMAC Taskforce/marshal and develop interventions to ensure that key stakeholders are engaged and informed on their activities.
“It is also aimed at finding answers to burning issues which if not properly addressed and timely, too, could adversely impact on the fragile security situation in the territory.
“It is important to state that interfacing with stakeholders is  essential in ensuring that citizens’ rights are protected while assisting the taskforce to carry out its assignment within the ambit of the law.”
The statement further stressed that the “NUJ remains committed as ever to ensuring that any act to suppress or infringe on peoples’ right will pass neither unnoticed nor unquestioned.
“We are confident that as a watchdog we will systematically monitor conduct of government at all levels and set agenda for good governance.”