“Strength does not come from physical capacity. It comes from an indomitable will”

The above quote from Mahatma Gandhi, an Indian lawyer, anti-colonial nationalist and political ethicist, who employed nonviolent resistance to lead the successful campaign for India’s independence from British rule and in turn to inspire movements for civil rights and freedom across the world, is apt in describing the decision by the Osun Youth Community to choose a non-violent approach to mark one year anniversary of the EndSARS protest.

They lived up to the billing of setting the pace, while others follow. Coming under the umbrella of the Osun Civil Society Movement, the youth of Osun gathered at the Aurora Events Centre, Osogbo, to not just mark the one-year memorial of the ENDSARS, which broke out last year, but to also interrogate the event and its attendant consequences.

They have demonstrated that intellectualism is the source and strength of development.

With the theme, ENDSARS: One Year After: Issues, Lessons and Regrets, Osun youths, yesterday, proved they are no pushovers in the affairs of the country.

They have also given hope that the status of Osun as the most peaceful State in Nigeria is sustainable.

With the benefit of hindsight and without sounding immodest, in terms of youth consciousness in sociopolitical space, after Lagos, Osun is naturally the next.

The Keynote Speaker, Dr. Oluyemi Omotoso Jnr., who is the Dean, Students’ Affairs of the Federal Polytechnic, Ede, spoke directly to the issues.

The Panelists were: yours truly, Ismail Omipidan; Chairman of the Osun State chapter of the Nigeria Union of Journalists, Wasiu Ajadosu; Mr. Taofeeq Badmus and Waheed Saka of the Osun Civil Society Coalition.

Dr. Omotoso among other things, submitted that Nigeria “should learn her lessons from internal and external developments.

“A popular saying goes thus: ‘no nation survives two civil wars.’ The organisation, commitment, determination, financial muscle and implementation of the spontaneous 2020 #ENDSARS protest show that a country like Nigeria may not survive another one,” he noted.

He added that there was the need for the Government to do everything within its powers to redouble efforts that would enhance good governance and reduce unemployment, poverty, and inequality.

On my part, it was an opportunity to clear some misinformation about what truly transpired on October 17, 2020 when Governor Adegboyega Oyetola was attacked at Orita Olaiya.

I told the gathering that the recommendations of the Judicial Panel would be speedily effected as soon as it returns from the initiator, the Federal Government.

I added that Government was in the process of reviewing the recommendations and initiating implementation process when a directive came from the Federal Government for state governments to submit their reports.

I sympathised with individuals and institutional victims, and assured businesses in the State that the government remains committed to keeping businesses alive and creating an enabling environment for businesses to thrive.

While fielding questions during a panel discussion at the event, I bemoaned the spate of misinformation about the incident at Orita Olaiya on October 17, 2020, adding that video evidences avail for verification.

I insisted that, contrary to the misinformation, the two deaths recorded last year did not happen when Mr. Governor visited the barricade to identify with the protesters before he was attacked by some hoodlums, who had infiltrated the protest ground.

I also emphasised that the state government does not control the Police because it is a federal institution, adding that it is unthinkable that anyone would assume that the State government is over-pampering the Police.

At some point, the atmosphere was charged. And because it was streamed live on Facebook, as I later learnt, friends and well wishers back home became apprehensive. I appreciate their concerns. But little did they know that it was better to allow the youth ventilate their anger than try to shut them out.

With what happened on Wednesday, October 20, 2021 in Osogbo, Osun has scored another first and has set the template for Government-Youth engagement on a thorny issue like EndSARS, going forward. 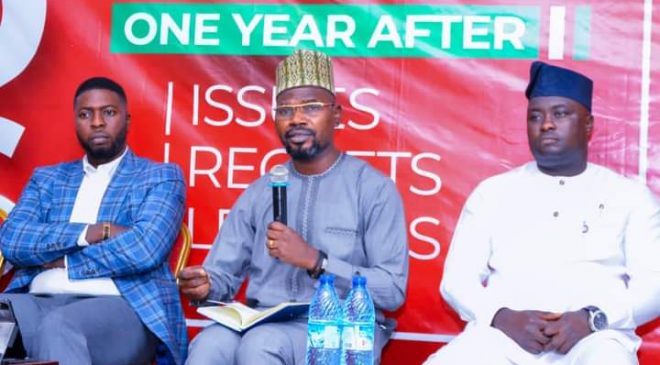 Having the Youth from all walks of life and cutting across political divides/affiliations gather in a place to jaw-jaw in Osun is a big plus for all those behind the initiative.

The outcomes of the engagement enable our youth to understand better and will not allow them to act spontaneously on critical and topical issues.

Never again shall we yield the space to persons masquerading as Youths , just to unleash terror and violence on our people and our State.