For close to about two decades, I have been involved in the business of gathering, processing and dissemination of information to the public. Although, I will still be doing same thing, it will be primarily to promote and propagate the activities and leadership philosophies of my principal, Governor Adegboyega Oyetola of The State of Osun.

Today is his 65th birthday anniversary. The first since he was sworn in as governor. But before I continue, I want to make a few confessions.

One, part of the title of this piece was adapted from one of the pieces, written seven years ago by my former boss, a man who saved my career at The Sun Publishing Limited, Pastor Dimgba Igwe. Late Igwe, a former Deputy Managing Director/Deputy Editor-in-Chief of The Sun, was the company’s Vice Chairman until his death five years ago. May the Lord be pleased with his soul. 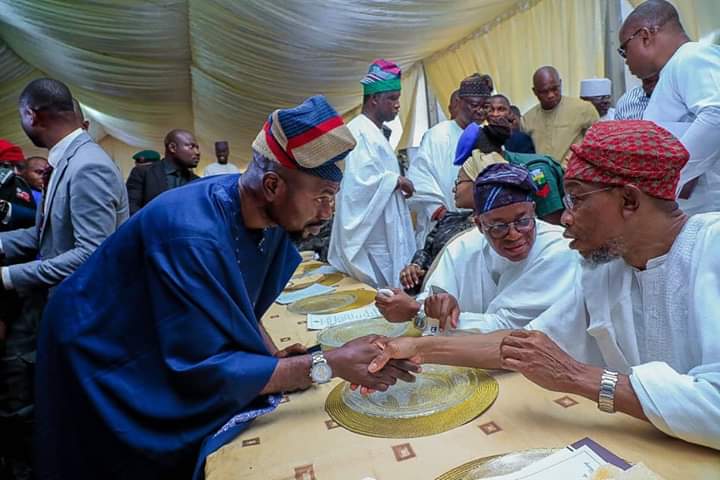 Two, until I met my principal, Oyetola, for the first time in my entire life on July 31, I never had any close contacts with any governor or governorship candidate of The State of Osun since 1999.
Three, before I met him in July this year, I had spoken to him on phone once to crosscheck some information about a story I was doing at the time.

Coincidentally, it was in July last year. It was about two weeks to the primary election that produced him as candidate. I was humbled by the fact that he picked the call at first dial from a total stranger, a rarity with most big men of his status. He ended the conversation by saying: “Endeavour to be coming home regularly so you can contribute your own quota to the growth and development of the state.” As fate would have it today, he became the facilitator of my being in Osun to serve.

Four, considering my long years in the North, I had thought that if I would ever have any opportunity to serve in the public service, it would either be Abuja, which I had tasted in any case, or any of the states in the North where I have strong links. Osun had therefore never been on the radar for me.

Five, my appointment has rekindled my hope in Nigeria that one truly does not need to know anyone in the corridors of power to be given an opportunity to serve. It also validates Oyetola’s disposition as a leader, who not only believes in merit, but also passionate about Osun’s growth and development.
Six and finally, though not resident in the state before now, I have always had more than a passing interest in the politics of the state because like my principal, I am passionate about the growth and development of my state.

Having made those confessions let me proceed. As a reporter, I have heard and read about Adegboyega Oyetola, long before I ever met him. But I came in close contact with him about two months ago after he appointed me as his Chief Press Secretary. Since then, I have found in him a leader, who not only understands and appreciates the peculiar needs of an average Osun person, but one, who is passionately interested in growing the state from where his predecessor left off.
He has so far proven that being above 60 has no place in providing direction and good leadership. Since the creation of the state, this is the first time I will be writing a birthday tribute in honour of any Osun governor.

Interestingly, from what I have seen so far, I make bold to say that what Osun citizens will get from Oyetola’s leadership will be an enduring legacy that would not only stand the test of time, but one that would be remarkably different and which would remain a reference point, long after Oyetola would have completed his tenure.
So far, he has kept faith with the vision of the founding fathers of the state to sustainably build Ipinle Omoluabi – State of the Virtuous. With what I have seen, Oyetola has demonstrated that he is one leader that can be trusted by the people at home and in the Diaspora. Unlike what others do by giving excuses, he has since begun fulfilling some of the promises he made to the citizens of the state during the electioneering, despite the initial litigation distraction that lasted about eight months.

This tribute is, therefore, to further encourage the governor not to relent, as he approaches the most critical period of the administration –unveiling of his cabinet.

It is on record that his decision to construct, renovate and revitalised 332 Primary Health Care Centres (PHCs) at a go, is unprecedented in the history of governance in the country. This fact was confirmed by no less a personality than the immediate past Health Minister,

Professor Isaac Adewole. Oyetola in just three days inaugurated 25 PHCs out of the 100 that had been completed, a project other leaders would probably spend four years to complete.
Speaking at one of the inauguration ceremonies in Ilesa, the former minister, who had the previous day said “With what I have read and seen myself, I can say it without equivocation that no governor has done what Osun had done particularly in the health sector,” further appealed to Ijesa people to ensure that they speak loudly with their votes in 2022 in support of the governor and the All Progressives Congress (APC).

He added: “I said it yesterday that Osun has become the leading light in the health sector as reflected in the huge commitment that the state had made to repositioning the sector for the optimum use and benefit of the citizenry.
“I am repeating it that no government in Nigeria has embarked on the construction and renovation of 332 PHCs at a time as being done by the present administration in the state.

“This is a rare feat. This is also a welcome development targeted to support the health needs of the people across the nooks and crannies of the state”.

Also speaking on the occasion, specifically, at Imo, Chief Kunle Odeyemi and Engr. Remi Omowaiye, supported the former minister’s position.
Omowaiye, who is the state’s Supervisor for Works, said the administration had so far shown that what the state witnessed in the last administration in terms of development would be small compared to what it would witness in the present administration.

On his part, Chief Odeyemi said: “I must commend the state government for reviving the lost glory in the health sector. This is a welcome development aimed at ensuring that citizens have access to quality and affordable healthcare delivery.

“There is no doubt that this initiative will further help to enhance quality service delivery and boost the sector for the benefit of the people of the state.
“I am appealing to our people to take greater advantage of this laudable opportunity provided by the state government towards ensuring general healthy living.

“I want to also assure the governor that in 2022, the votes we gave to our representatives in the state Assembly, will be small compared to what we will give you”.

But since this piece is not strictly about the governor’s scorecard, especially because the one year anniversary is just around the corner, I will leave it at that for now. Suffice it to say, however, that in the last 10 months, the governor has touched virtually all the sectors, with his imprints everywhere without neglecting any section of the state to the admiration of all, including those who initially were skeptical about his leadership style in the build up to the governorship poll.
Although, in terms of performance in office, it may be too early to start making comparison, but if the Hausa proverb that “a good Friday is determined by the Wednesday preceding it” is anything to go by, it will not be out of place to conclude that, like the governor reiterated during a recent Celebratory Banquet, he is committed to bringing about development that will make it difficult for opposition parties to contest future elections in the state. I see it happening.

My dear leader, already, you have started well, Allah who fulfilled the promise He made to you concerning the governorship contest in the first instance will never forsake you. Allah has chosen your cabinet for you. But like one of the clerics prayed during the special prayer to mark this year’s Islamic New Year, if any person, who does not share in your vision and commitment to the growth and development of the state has mistakenly found their way into the administration/cabinet, by His Grace, the person will be mistakenly excused from the administration/cabinet.

Sir, as you mark yet another birthday today, the first since becoming governor, I pray Allah to grant you the tolerance to deal with all the trials that would be coming your way. I also pray that Allah will give you the patience and courage to carry on and the ability to be grateful to Him, in the end.

Happy birthday to Governor Adegboyega Oyetola, my boss! Join me to wish the man who made it possible for me to re-connect with my roots a thunderous Happy Birthday, as he clocks 65.

Omipidan is the Chief Press Secretary to Governor Adegboyega Oyetola.