Skip to content
You are here
Spread the love
State of Osun workers on Wednesday lauded the administration of Governor Adegboyega Oyetola for taking the workers’ welfare as priority.
The state’s workforce disclosed that the Governor’s high sense of commitment to good governance, transparency and accountability had prevented any form of industrial action in the last 24 months. 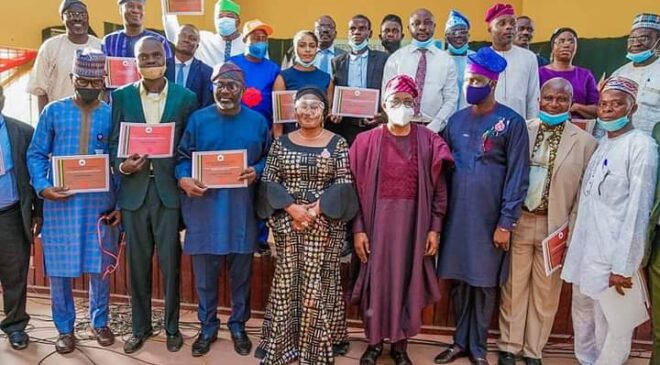 The workers said these during the Year 2020 Civil Service Productivity Lecture, Awards and Colloquium organised to commemorate the 2nd year anniversary of Governor Oyetola in office, held at Staff Development Centre, Abere, Osogbo.
Speaking at the event, the State Chairman, Nigeria Labour Congress (NLC), Comrade Jacob Adekomi, said the present administration had displayed sincerity and honesty in the management of the state’s resources than for any worker to agitate or embark on any strike.
“Sincerely speaking, the policies of Mr.  Governor are too good, masses and workers friendly than for any worker to think of  or agitate for any strike.
“Also, his level of transparency, accountability and openness has been the reason for the State not to have experienced industrial action in the last 24 months.
“This is a governor who calls workers to the round table whenever the allocation comes to the State. When one is dealing with somebody that is honest, sincere and fair, I don’t think the issue of strike can occur.
“In Osun, we have a governor who pays workers’ salaries as and when due. He has approved the minimum wage, lifted ban on promotions and conversions and as well given express approval to several demands put before him.
“So, there is no way one will not give such a person support. As you can see, our governor is humane, loyal and faithful, and this has been the brain behind the existing mutual relationship between the government and the workforce,” he added.
Also speaking, the Head of Service, Dr. Festus Olowogboyega Oyebade, eulogised Governor Oyetola for redefining the Civil Service through his prompt response to the workers’ welfare and wellbeing.
Oyebade who described Oyetola as a workers’ friendly Governor, said it is on record that the present administration had rekindled the collective hopes of the State workforce and placed them to appropriate positions.
Describing Osun workers as the most productive and most committed workforce, Oyebade commended all categories of workers in the State for being committed to duty and for  upholding the civil service rules and principles, which he said had culminated to the all-round success recorded so far.
In his remarks, the Governor of the State of Osun, Adegboyega Oyetola, hailed the doggedness, resilience and unwavering commitment of workers in the State, which he described as the driving force for the smooth relationship existing between Government and the workers and and among the State workers.
He acknowledged the unalloyed support and understanding displayed by the workers since the inception of his administration, noting that, “workers are our pride and we are immensely proud to have them as dependable partners in our quest for building the Osun of our dreams”.
Oyetola who described the role and place of the civil service in facilitating effective governance  said “it is worth asserting that without a civil service that is adequately equipped to play a stabilising role in our nascent democracy, we might as well talk of impactful governance in elusive terms”.
Oyetola added: “I must note that we count ourselves very privileged to have people of your exposure, calibre and pedigree to be available for us to draw from.
“Again my unreserved gratitude also goes to you, our dear bureaucrats for being present today and for the unalloyed support and understanding you have given us since we assumed office.
“You are our pride and we are immensely proud to have you as dependable partners in our quest for building the Osun of our dreams.
“I assure you that as an administration, we will continue to support our bureaucracy to deliver on its mandates as enablers of good and efficient governance.
“Our recent approval of the minimum wage and lifting of embargo on promotion of our bureaucrats is a step in this direction. Our dire financial condition notwithstanding, we are committed also to paying the pensions of our retirees who have served this state diligently. Rest assured that we will not waver on this.
“While I congratulate all our awardees for the deserved honour, I charge you and indeed all our  bureaucrats to do more. For, it is in our doing more that we will be able to create more wealth for catering for the welfare of our people and providing adequate social infrastructure for all.”
Commenting on the topic of the Colloquium: “Contribution of Civil Service to Effective Governance”, the governor said the theme would afford the workers an opportunity to re-examine their roles and place as  civil servants in facilitating effective governance.
Government officials and political appointees were honoured  at the event. They included: Mrs Florence olubunmi Abioye; Mrs Kehinde kekere-ekun; Mrs Bidemi David ; Mr Adeyemi Emmanuel Aboderin; Mr Dapo Adeniji; Mr Oladipo Obidija,Mr Nureni Lasisi; Mr kamorudeen Alao; Commissioner for Works, Remi Omowaye; Commissioner for Commerce Cooperatives Industry and Empowerment, Dr. Bode Olaonipekun; Commissioner for Education, Folorunso Oladoyin; Commissioner for Health, Rafiu Isamotu; Special Adviser to the Governor on Public Health, Siji Olamiju; Osun TVC Correspondent, Rafiu Hammed; Special Adviser to the Governor on Education, Jamiu Olawumi; Special Adviser to the Governor on Works, Tooke Olaniyan; the Chief Press Secretary to the Governor, Ismail Omipidan and the Press Secretary to the Deputy Governor, Niyi Ajibola.
The occasion was attended by; Osun First Lady, Mrs. Kafayat Oyetola; Deputy Governor, Benedict Alabi; immediate past Osun Deputy Governor, Mrs. Grace Titilayo Ponle; Secretary to the State Government, Prince Wole Oyebamiji; Chief of Staff to the Governor, Dr. Charles Akinola; members of the State Executive Council, top government functionaries, ranks and files of the state’s workforce, politicians.