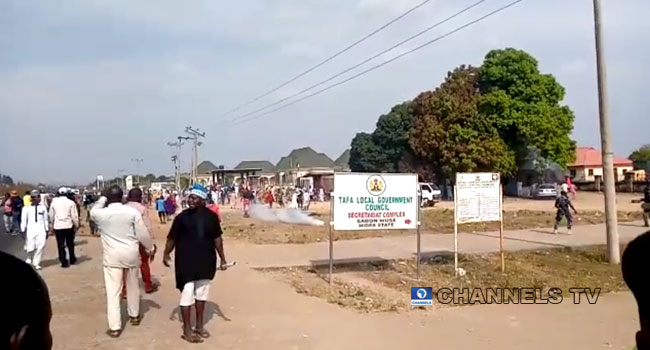 A Channels Television reporter has been assaulted and the cameraman arrested by police officers in Niger State.

The police were dispersing a crowd of angry youths who protested the cancellation of results in Tafa Local Government Area (LGA), following the elections in the state.

Canister, live ammunition, sticks and gun butts were used to disperse the crowd, including the Channels TV crew.

The crew were at the local government’s Secretariat at Sabon Wuse to do a follow-up on the aftermath of the election when they were beaten up after identifying themselves to the police as pressmen on official duties.

The protesters had blocked the Kaduna-Abuja Highway before policemen from the Tafa LGA secretariat started shooting sporadically into the air to disperse the crowd.

The youths were agitating against the cancellation of the poll in the area, insisting that it was won by the candidates of the Peoples Democratic Party.

The election in the local government was cancelled after the returning officer was declared missing.

The Chairman of the State Independent Electoral Commission (SIEC), Aminu Baba, who confirmed this had refused to disclose the name of the returning officer.

He, however, revealed that the victim is a lecturer at one of the tertiary institutions in the state.

The SIEC boss added that the report that got to the commission was that after elections ended on Saturday, the returning officer could not be found for collation.