Skip to content
You are here
Spread the love
Niger State Governor, Abubakar Sani Bello has said religious leaders were playing vital roles in the dissemination of right messages to the people.
The Governor stated this when the Forum of Imams of Juma’at Mosques in the state paid him condolence visit over the death of the Emir of Kontagora, Alhaji saidu Namaska at the Government House Minna.
Governor Sani Bello noted that governance remained a great task that required the support of the people,he commended the Imams for their advice on areas that needed government’s attention. 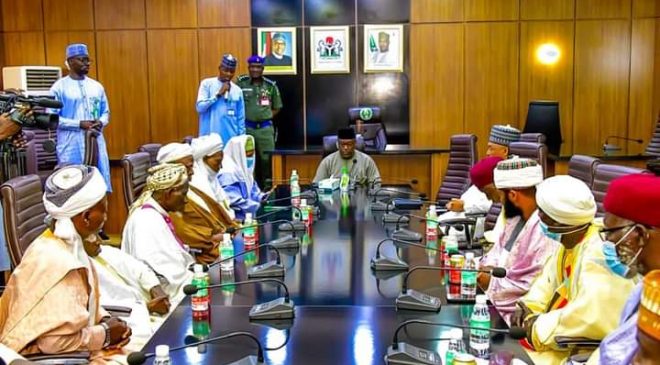 Speaking on the demise of the late Emir of Kontagora, the Governor described him as a selfless leader and a philanthropist who contributed a lot to see to the welfare of the less privileged.
On a request from the Imams Forum to renew the tenure of the former Chairman of Bureau for Religious Affairs, the Governor suggested to the Forum to approach the State House of Assembly to amend the law on the Chairmanship tenure of the Bureau pointed out that as a leader of the state, he can not act against the law he assented to.
He however advised them to select another Chairman in the event their request is not granted by the State Assembly and also encouraged them to continue to give proper direction to the public through their sermons.
The leader of the delegation and Chief Imam of Minna Central Mosque Sheikh Isah Fari commended the Governor for establishing the State Bureau for Religious Affairs in the state added that it has foster peaceful coexistence between the major religions in the state.
The Imam of Niteco Jumma’at Mosque, Mal. Idris Muhammad acknowledged all the efforts of the Governor in ensuring religious harmony in the state and urged him not to relent.
Mal. Muhammad said the Imams Forum has been in the vanguard of sensitising the people on government policies and programmes since its establishment by the present administration.
Also speaking, the Chief Imam of Bida Sheikh Adamu Yakatun said the establishment of the Bureau has brought unity among the Imams and has also curb religious crisis in the state.
Special prayers were offered for the repose of the soul of the Late Emir of Kontagora, for divine intervention on security challenges that have bedevilled the state and the country for wisdom for the Governor to continue to provide good leadership for the state.
.