A Senate panel on Wednesday held a public hearing to investigate telecommunications network operators in the country over increasing rate of drop calls.

President of the Senate, Ahmad Lawan has asked the GSM operators in the country to refund to their customers money which they paid on drop calls. 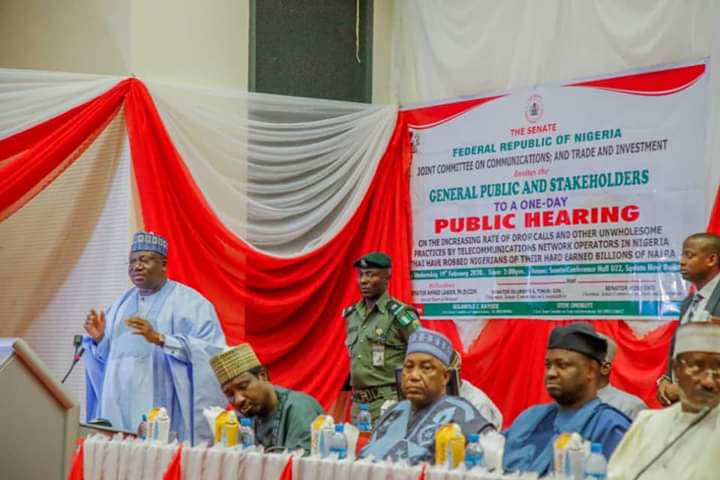 The public hearing was conducted by joint Senate committees on Communications, Trade and Investment.

According to the chairperson of the Senate Committee on communications, Senator Oluremi Tinubu, the session was specifically “on the increasing rate of drop calls and other unwholesome practices by telecommunications network operators in Nigeria that have robbed Nigerians of their hard earned billions of naira.”

The public hearing was held sequel to a resolution of the Senate last July mandating the two committees to jointly investigate the allegations of cheating through drop calls by the communications network operators.

Declaring open the forum, the Senate President, Ahmad Lawan said, for quite a long time, the GSM service providers in the country have shortchanged their customers through drop calls.

“The drop calls shortchange consumers. To me, it’s a very serious issue and we have been with it since as far as I can remember.

“We have been shortchanged for a long time. We consider this development unacceptable.

“We mandated our committees to thoroughly investigate the issue of drop calls. This is in the interest of the people we represent. And even the people who only come to Nigeria either for tourism or business or whatever.

“What happens in Nigeria, especially as far as the attitude and behavior of the service providers hardly happens anywhere in the world.

“What MTN does in Nigeria, MTN doesn’t do that in South Africa. All other service providers are also culpable. We have witnessed it for years. Maybe the time has come for us to reject it.

“Going forward, it’s not only making it better, but what happened to all the money that we paid for no service rendered.

“I think the committee should insist on what happens to all the money people in this country paid for no service. Other countries give money back. But here you denied us and you don’t give one Kobo.

“So this public hearing is not going to be like the other previous ones. Everybody complain of drop calls except the operators because that is booming business for them.

“And the kind of market that we have in Nigeria, is such that you don’t have this market anywhere in the world.

“When a Nigerian will have three lines, yet we don’t get the service that we paid for,” Lawan said.

The Senate President also accused the regulatory authority, Nigerian Communications Commission (NCC) of not doing enough to check the sharp practices by the service providers.

“NCC will have to sit up because NCC, sometimes, is either inept or it is simply flowing with the service providers.

“So we want to see a situation that this public hearing will provide a way out to save us as Nigerians. That when we pay for services, we get value for money. That is business.

“Whoever will provide better Service, I think Nigerians will be better advised to use that service whatever it takes and whoever is not, Nigerians should avoid such service provider. But at the moment, all the service providers are involved in these drop calls,” Lawan said.