On Tuesday, November 30, 2021, I was one of the resource persons at a 1-Day Capacity-Building Workshop for Defence Correspondents which held at the New Conference Room, Defence Headquarters, Abuja.

Organized by the Defence Headquarters in collaboration with TheMediaToday (TMT) International, the theme of the workshop was: “The Role of Defence Correspondents in Enhancing National Security: Imperative of Conflict Sensitive Communication. 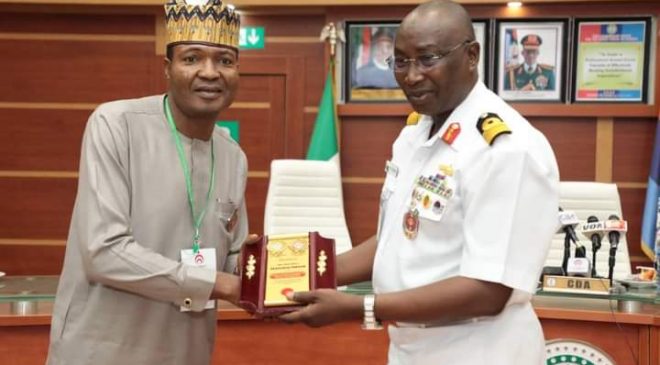 The Chief of Defence Staff, General LEO Irabor, the Guest of Honour, who was represented by Chief of Administration, Defence Headquarters, Rear Admiral Adamu called on Defence Correspondents to report defence and security issues using national security as yardstick.

Other papers presented at the seminar included: Overview of Military Terminologies for Nigerian Media by Commander AB Ayi, The Challenge of a Defence Correspondent, by yours sincerely, and Journalist Code of Ethics, Conflicts of Interest and National Security by Dr Theophilus Abbah, former Editor, Sunday Trust.

The interactive session on the papers was moderated by Mr. Dayo Ayetan, International Centre for Investigative Reporting (ICIR) with Alhaji Yushau Shuaib, publisher of PRNigeria and Mr. Ben Okezie (security expert).
In my presentation, I discussed the relationship between the military and the media globally, continentally, regionally and nationally.
I argued that that while the military and the media carry out dominant roles in national development, it is in the course of the military carrying out its professional responsibilities and the media playing its professional roles that friction usual occurs.

I tried to established the fact that frosty relationship between the military and the media is not peculiar to Nigeria. Research indicates that even in advanced democracies such as United States and the United Kingdom, there have been what experts call “vicious circle in which each side accuses the other of unfair practices….(where) journalists distrust military officials, while the military view the press as subversive and unpatriotic.”

Despite these challenging relationships, military and the media have always worked together.

I also looked at history of war reporting and the man who invented it. William Howard Russel (1820-1907), considered as the pioneer of war correspondents and precursor to modern war corresponding. From 19th through 20th to 21st centuries, various war/defence correspondents have emerged and some were even killed in action during the first and second world wars and other wars. I also talked about war reporting in Nigeria during the Nigerian Civil War, ECOMOG Operations in Liberia and Sierra Leone, as well as the ongoing counter insurgency operations in the Northeast.

I also discussed the concept of embedded defence correspondents and how 2003 Operation Iraq Freedom redefined the concept of war reporting where the US Military embedded 775 journalists with the Allied Forces from the beginning of the operation. I shared my experience as an embedded defence correspondent with troops in the Northeast at the instance of then Chief of Army Staff, Lt Gen TY Buratai.

I concluded my presentation with views of military historians, defence and security experts that: while there is clear difference between the mission and goal of the military and the press particularly centering around issues of access to operational sector which makes historical tensions between the two inevitable and poses a huge challenge for defence correspondents, their aspirations of professionalism makes cooperation a reasonable possibility.

Therefore, both the military and the media must realize that “we are in it together” as mutual partners and patriots.