Skip to content
You are here
Spread the love
President of the Senate, Ahmad Lawan on Thursday advanced reasons why the ruling All Progressives Congress(APC) will continue to harvest decampees from the opposition parties.
Lawan said people were beginning to appreciate the fact that the government of President Muhammadu Buhari had done so much with so little resources. 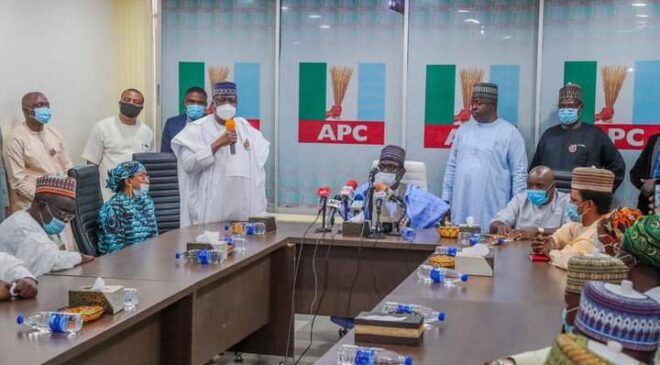 Lawan spoke in Abuja when he led Senator Ishaku Elisha Abbo and his fellow decampees from Peoples Democratic Party in Adamawa to the National Secretariat of the All Progressives Congress.
The Yobe State Governor, Mai Mala Buni who is also the Chairman of the Caretaker/Extra Ordinary Convention Planning Committee led his team to receive the new decampees.
The Senate President said the more people in opposition appreciated the giant strides of the Buhari government, the more the harvest of decampees into the ruling APC.
“We believe that we haven’t seen anything yet. We will see more coming from the opposition parties.
“Only last week, the Governor of Ebonyi State left PDP for the APC. Yesterday(Wednesday), the youngest Senator in the current dispensation, having consulted very widely, deeply with his people at home decided to leave PDP for APC.
“This is what we expect from leaders. When you see a government trying hard with so little to ensure development in our country, in our communities, and society, the best thing to do is to be part of that effort. That is patriotism.
“We came in 2015. We inherited everything but poor governance. But thank God, the President came with determination and focus to ensure that this country works for citizens of this country.
“That government resources are prudently and efficiently and economically applied for the benefit of the people.
“Though we inherited empty treasury, the price of crude went down so badly, yet the little resources we started with provided a lot more of infrastructure, of services to the people of these country.
“So any right thinking politician, when you see prudence, when you see integrity and sincerity, when you see purposefulness in leadership, the best thing for you to do is not to be left alone. It’s for you to join forces with such leadership for the benefit of people you represent or lead.
“I want to commend our brother, very Distinguished Senator Abbo for taking the right decision at the right time. Nigeria needs every hand on deck.
“This ship is going to reach the final destination by the Grace of God. We will continue to be committed to making Nigeria better irrespective of the resources available to us.
“We had our good days in revenue but those days were bad days in performance. Now it is the reverse. Our revenues are so low. Infact it has never been this bad and yet infrastructural development in Nigeria is unprecedented.
“With that so little, Nigeria is all over now a construction site. From the East to the West. From the North to the South. Therefore, our brother took the right decision by joining APC today,” the Senate President said.
Lawan who is also the leader of the APC caucus in the Northeast geo-political zone said the party would ensure that it captured Adamawa State and other states in the zone now being controlled by the opposition by 2023.
“Let me be very specific and emphatic. Adamawa State is APC. People in Adamawa, majority of them are APC and therefore Adamawa State deserves APC Governor, APC National Assembly, APC state Assembly and all the local government areas.
“I lead the Northeast caucus of the APC. We are doing everything possible and we will keep the momentum to ensure that all of Northeast turns APC by the Grace of God either before 2023 or by 2023,” Lawan said.
The Caretaker chairman of the party, Governor Buni assured the decampees that they would not regret their decision to join APC.
“Senator Abbo, your entry is timely because we will soon start the process of building this party from the bottom up.
“We are starting with the membership registration across the country and this will culminate in the National Convention to elect our new leaders who will take over the affairs of the party.
“Many more are joining the APC because we have a leader, President Muhammadu Buhari, who is doing justice to all manner of citizens,” Buni said.
Senator Abbo said he decided to decamp to APC because he was fascinated by President Buhari’s prudent management of the scarce resources and his commitment to the poor and vulnerable people in the society.