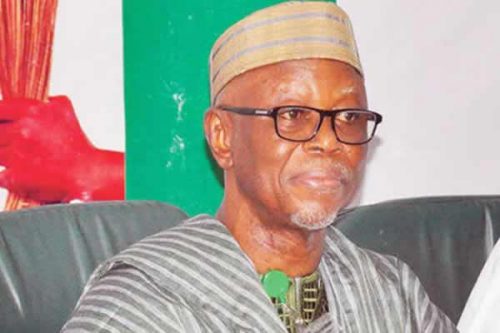 The Chief John Odigie-Oyegun-led National Working Committee of the All Progressives Congress has been granted a 12-month tenure extension. The committee tenure is to expire in June 2018

The tenure extension was the major decision taken after a three-hour meeting of the APC National Executive Committee held at the party’s national secretariat in Abuja on Tuesday.

At the end of the nearly three-hour meeting, the Kogi State Governor, Alhaji Yahaya Bello, announced the NEC’s decision to the media.

Bello, who was flanked by the party’s National Publicity Secretary, Mallam Bolaji Abdullahi, and some state party chairmen, said, “At the end of the National Executive Council meeting today, a major decision was taken in line with the constitution of our party. We are all aware that the tenure of the current NWC and the executive members of this party both elected and appointed comes to an end in June this year.

“Considering the time left for the party to conduct all the congresses and convention and considering that our leader, Senator Bola Tinubu, has been charged with the responsibility of reconciling all aggrieved members of our party, we cannot afford to approach the general elections with more dispute and crises.

“So, relying on Article 13 of our constitution, which empowers the NEC to carry out the function of the convention, the NEC has decided to extend the tenure of the current National Working Committee and other executive committees at various levels for another 12 months, starting from June 30th.”

The development is a major victory for the party’s governors who have been  speaking in support of the extension.

Earlier, President Muhammadu Buhari, in his opening remarks, had called for support for the Tinubu-led All Progressives Congress reconciliation committee he set up to reconcile aggrieved party members.

He said, “We all know that elections are looming in the horizon. We must therefore get our acts together. Accordingly, I implore all members of the party to give the Asiwaju committee full cooperation to resolve existing differences among our members in the states affected.

“We must not lose sight of our common purpose as a party to break the mould of Nigerian politics and take the country to new heights. Therefore, we have asked Asiwaju Bola Ahmed Tinubu to lead this process of restoring order, manage differences and strengthen the party.”

He commended the armed forces and the security agencies for fighting the Boko Haram insurgents.

On his administration’s performance on the economic front, Buhari said there was the need for Nigerians to remember what the situation was in the country in 2015.

“I am happy to report that slowly and steadily, we have managed to stabilise the country and redirect the ship of state.

“We have restored prudence to the management of resources and confidence in Nigeria has been restored.”

Earlier, the party’s National Chairman, Chief John Odigie-Oyegun, had said the party must do all it could to win the forthcoming governorship elections.

He said, “We obviously have a very tough year ahead of us. It is a year of challenges, multiplicity of activities beginning from the month of April, the process of conducting challenging elections in Ekiti in July and in Osun in September.

“These elections are precursors of the national elections. It is therefore necessary that we treat them with great seriousness because they are elections we should do everything to win.”