Skip to content
You are here
Spread the love
Niger state Governor,Abubakar Sani Bello has sought for the support of Nigerian Export Promotion Council (NEPC) towards increasing farmers productivity in Niger State. 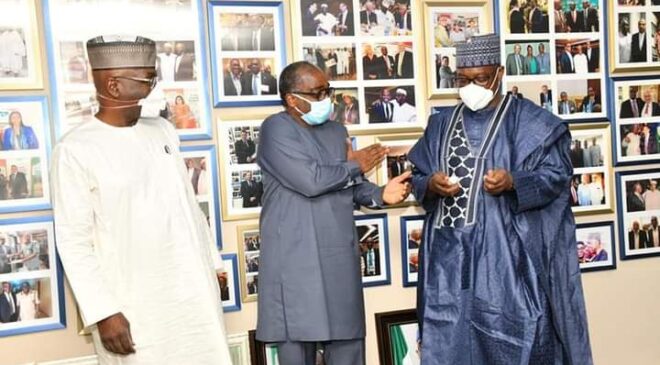 The Governor, who was received by the Executive Director (ED) of the Organization, Mr.Olusegun Awolowo in Abuja, said the state desired to partner with the council in various aspect, especially in agriculture to help boost farmers productivity in the State.
He enumerated some of the areas to include provision of improved seedlings, equipment and other agro-allied inputs to the farmers, suggesting that an institutional framework should be designed where the state government takes control, purchases the farmers produce through the establishment of a ‘one-stock-shop’.
Sani Bello explained that the one-stock-shop, if established, will lead to job creation, increase revenue to the government as well as enhance the nation’s Gross Domestic Product GDP.
He also solicited NEPC’s intervention in the establishment of domestic warehouses, fishery development, Shea Butter Development, Sesame Seed cultivation and other cash crops as well as capacity building for the farmers.
The Governor said, to achieve the above mentioned objectives, there was the need to set up a sustainable joint system to work with and to ensure it functions effectively and efficiently.
“We have to set-up a robust administrative system to ensure that there is no abuse, no misuse and ensure accountability because that also can be a problem”, he said.
The Governor maintained that Agriculture will play a crucial role in the ‘zero-effort’ economy which the Federal government intends to achieve.
The Executive Director of NEPC, Olusegun Awolowo commended the state for establishing Export Commodity Agency, added that the Organization has already considered partnering the state especially in the area of Shea Butter as it is blessed with abundance of Shea trees.
He said the Governor’s visit has further confirmed commitment of the State government in partnering with NEPC having understood the mutual benefits the partnership will yield particularly now that the presidency has fully supported the NEPC especially towards achieving the zero-oil economy in the country.