Skip to content
You are here
Spread the love
The Governors of Niger and Kaduna States, Abubakar Sani Bello and Nasir El-Rufai have hailed the Nigerian Army for the successes recorded in dealing with banditry and kidnapping activities in the North-West and North-Central parts of the country.
The Governors gave the commendation during an assessment tour to the Special Army Super Camp 4 in Faskari, Katsina State to ascertain the level of successes made so far by the operation “Sahel Sanity” recently launched to fight banditry, kidnapping and cattle rustling activities that have bedeviled the regions. 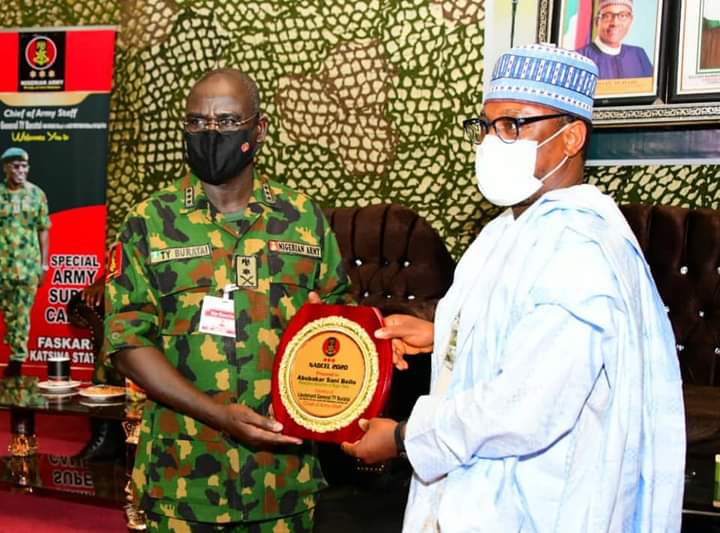 On his part, Governor Sani Bello said the establishment of the Super Camp and Operation “Sahel Sanity” has brought about tremendous successes against bandits and other criminal elements within one month of its activities.
He said farmers in many communities that were hitherto affected by banditry and Kidnapping had returned to their farms, expressing confidence that banditry would soon be a thing of the past in the regions.
The Governor also acknowledged the efforts of officers and men of Nigerian Army towards ensuring a safe society and urged them to sustain the tempo.
“I am highly impressed by the super camp and I think this will go a long way towards improving the confidence level of the communities affected. We can see that farming activities have resumed in most of the communities.
“We have always been concerned with the economic activities in the rural areas. I must commend the COAS and his officers and men for a job well done”. The Governor added. 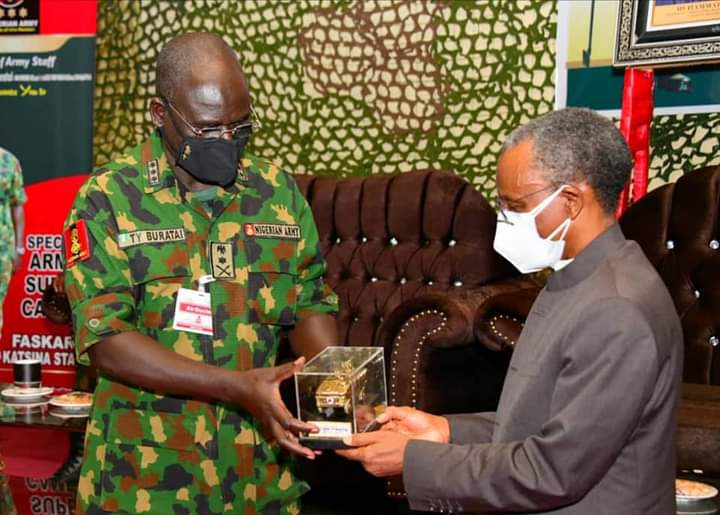 He also expressed optimism that the planned expansion of operations in the regions by establishing more camps would go a long way towards addressing security challenges pointing out most of the forest areas used by the bandits as safe Havens have boundaries with the State thereby impacting negatively on the State.
“I believe that once these locations are manned fully, it will definitely go a long way towards improving security. Overall, tremendous successes have been recorded so far and I am sure the Nigerian Army are up to the task.
He assured that the state government would continue to support the Military to be able to carry out their operations successfully.
Earlier, Governor El-Rufai also opined that the operation has made remarkable and impressive successes since inception, added that those that lived in the areas of operation can attest to it.
The Kaduna State Governor said at the commencement of the year, they had fears considering the escalating level of banditry activities in the affected states in the North-West and Niger state in North-Central which had the potential to cripple farming activities in the regions and create serious economic consequences for the country leading to food insecurity.
El-Rufai said that the establishment of the Operation Sahel Sanity,  in addition to other security exercises, would bring about better and improved security in the regions stressing that though security had improved compared to what it used to be a month ago, a lot still needs to be done.
“My brother the governor of Niger State observed on his way here that all the farms were looking green and booming and farmers were in their farms.
“This is as a result to a large extent of the successes recorded by Operation Sahel Sanity”, he said.
They both expressed gratitude to Mr President for the intervention which has subsequently reduced the level if insecurity and is also bringing succour to the rural dwellers who are the mostly affected by the activities of bandits.