Skip to content
You are here
Niger State Governor Abubakar Sani Bello said government will continue to do its part in ensuring  that her investments are functional so as to add value to the State and the people.
Governor Sani Bello stated this during an inspection visit to the State Printing Press in Minna at the instance of the State Assembly Committee on Rules and Business. 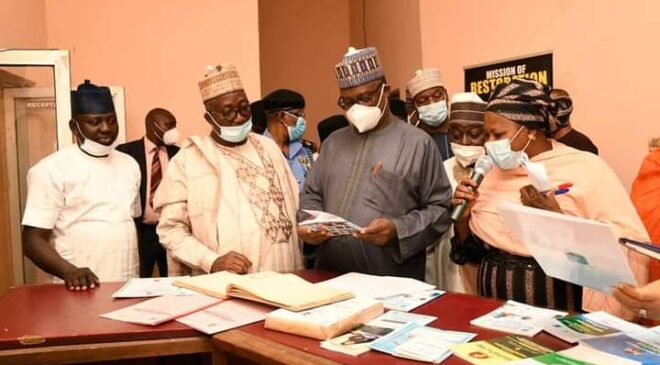 The Governor who was conducted round the units in the Printing Press by the Director Hajiya Fatima Mohammed and the Permanent Secretary Special Duty SSG’s Office Gyiwodeyi Francis, said that government will provide a conducive working environment for the staff, having seen their passion and enthusiastic attitude to work.
He said though most of the machines in the printing press were installed in 1977, government will work towards repositioning the printing press to compete favourably with any other, by getting the needed modern machines.
The Governor maintained that equipping the printing press will boost the internal revenue generation of the State and stressed the importance of maintaining government assets.
” Once we are able to change some of these equipments, the Niger State Printing Press will become the State of the art Printing Press and  will be able to compete with any other Printing Press. It will also serve as a source of generating revenue for the printing press and government”, he added
Governor Sani Bello observed that Col.Cletus Emen was the last State Governor that visited the printing press, added that the State had lots of investments in different places that have been neglected and need to be resuscitated to function effectively.
He said sustainability was very important and government investments should be made functional and effective adding that government will consider absorbing the adhoc staff at the printing press as many of the staff will be retiring soon.
Director of the of the Printing Press Hajiya Fatima Mohammed alongside the Permanent Secretary enumerated some of the challenges confronting the printing press to include inadequate staff, lack of modern digital machines, lack of utility vehicle, hazard allowance and a face lift to the entire structure.
They however appreciated the Governor’s visit, and assured that with the availability of needed machines and patronage, the printing press has the capacity to meet it revenue target.
The Chairman Niger state House of Assembly Committee on Rules and Business who is also a Member Representing Mokwa Constituency, Abdullahi Shaba Gbara explained that the Committee members had earlier visited the printing press to assess it as part of their oversight functions and saw the need for the Governor to inspect it with the view to improving on what is on ground.
The Deputy Governor Ahmed Muhammed Ketso, Secretary to the State government Ahmed Matene, Chief of Staff to the Governor Ibrahim Balarabe and other State executive council members as well as the members of the House Committee on Rules and Business were among those that accompanied the Governor on the inspection visit.