Skip to content
You are here
The Governor of the State of Osun, Adegboyega Oyetola, on Thursday inaugurated the multi-million state-of-the-art Chief Adebisi Akande Shopping Complex in Ila-Orangun. 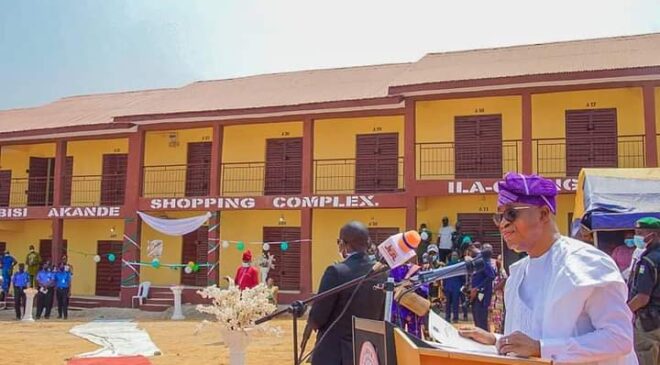 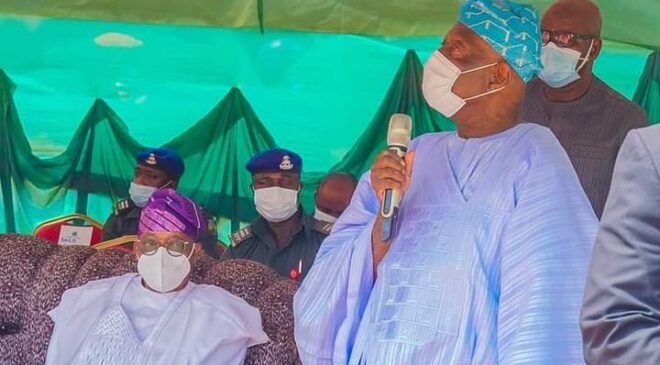 This was even as the Governor charged political office holders, particularly elected officers, on the need to focus more on people-oriented and human capital development projects aimed at transforming the people and the society.
The newly-built and inaugurated shopping complex named after the worthy and illustrious leader and former Governor of Osun, Chief Akande, was executed by the Chairman, Ila Local Government, Hon. Joshua Ademola Adediji.
Addressing the people at the inauguration ceremony, Oyetola said it had become imperative for those in government to prioritise the welfare and general well-being of the people to which government is formed.
Oyetola who described local government as the closest to the people, said its relevance to existence could only be justified in the volume of impacts made in the lives of the communal and the society at large.
According to him, the relevance of local government is only to the extent to which it served the needs of the people at the grassroots.
Oyetola said it behoved all leaders to diligently identify what the needs of the people are and make conscious efforts to meet those needs, added that, it was sacrosanct for those in the position of authority to replicate themselves by executing impactful and life-changing projects.
“We must realise that the only way to live forever in the hearts of the people is to always put them first and serve well,” Oyetola added.
While applauding the Chairman for the laudable project and for naming the legacy project after Chief Akande, Oyetola said, “this is the legacy our fathers like Chief Akande have demonstrated with their enviable political careers. And I must say, it is the secret of a life of timeless relevance.
“I must equally note that with this honour, you have scored two significant points, or as it is often said, killed two birds with a stone. That is, providing a facility of felt need and honouring a deserving leader.
“In a nation where poor models of leadership on several fronts abound, it is apposite to identify those who hold counter-narratives and project them for honour.
“When this is done, we will entrench the values of integrity, hard-work, selflessness, and service. This is the pathway to rapidly multiply the Akande tribe in our midst and build a society filled with inspirational minds for our young people,” Oyetola added.
Earlier, Chief Adebisi Akande, a former Osun Governor, applauded the sense of humility and sense of integrity of Governor Adegboyega Oyetola which he said had culminated into milestone achievements recorded by his administration.
He expressed gratitude to the Council Chairman for the honour done him, described the gesture as a welcome development.