Skip to content
You are here
The National Human Rights Commission on Thursday awarded a total of One Hundred and Forty Six Million Naira(N 146,000,000) as compensations to 27 petitioners for the brutalities, harassment, extortion, extrajudicial killing of their loved ones perpetrated by the operatives of Nigerian Police as recommended by the Independent Investigative Panel on human rights violations by the disbanded Special Anti-Robbery Squad (SARS) and other police units in Abuja.
The Executive Secretary, Tony Ojukwu SAN, while handing out the cheques to the victims, disclosed that the Justice Suleiman Galadima retd led panel made the monetary compensation as part of its  recommendation to the Commission at the end of its sitting, and it is part of the Commission’s mandate to ensure compensations are paid to victims who have  suffered  human rights violation, adding that “where there is a violation there must be a remedy”. 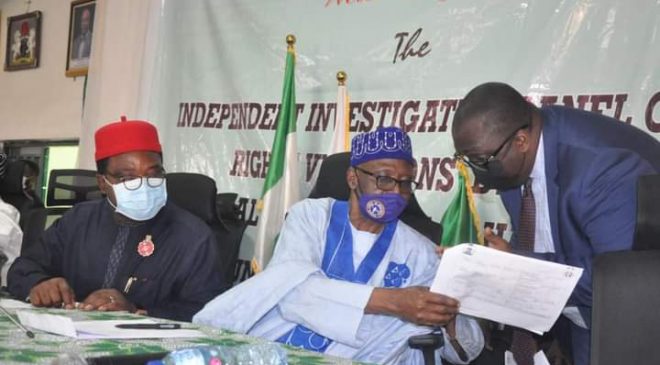 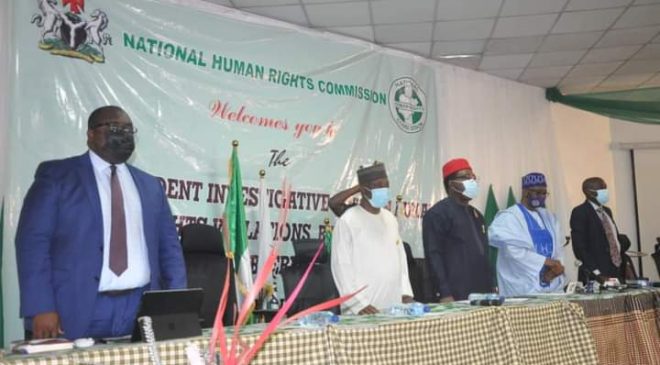 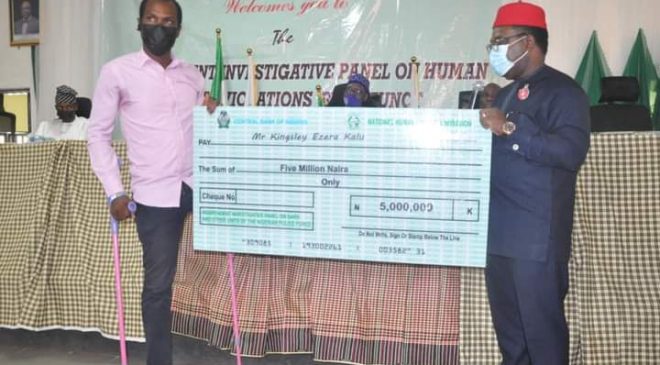 The Independent Investigative Panel  made the awards and compensations according to the following categories of  human rights violations, extrajudicial killings and enforced disappearance.
Others are Cruel, Inhuman and degrading treatment and torture, Illegal Arrest and Prolonged Detention and Confiscation of Property and threat to life.
Seven of the petitioners were awarded over N10m each as compensation over the extrajudicial killing of their family members.
Among those compensated were family of  the following deceased; Anita Akapson with the sum of  N 15m, Festus Idehen’s family was awarded N15m . While Victoria Agori who suffered torture in the hands of the Police and her son, judicially killed  by the  police was compensated to the tune N15m.
The families of Angela Igwetu, Kenneth Umunna, Moses Mfe family and Edward Leera  were compensated with N10m respectively.
The second set human rights violation awarded were for victims who suffered cruel, inhuman and degrading treatment and torture, from the police. Cases bordering on  accidental bullet discharge and abuse of power.
The beneficiaries who suffered accidental bullet discharge were Bello Akubuokwu , Kingsley Ezera and Favour Ajibo, were awarded  N500,000, N5m and N5m respectively.
While Julius Ogalanya was awarded  N5m on the grounds of cruel inhuman degrading treatment and threat to life.
Similarly, Marcus Idianose, Raphel Tersoo,  Chukwuemeka Amadi,  Iwuanyawu, James Dalis were arbitrarily arrested and suffered prolonged detention, they were both compensated N3m, N3m, N2.5m, N2m,N1m respectively.
Those whose properties were confisticated by the Nigerian Police, Tochukwu Dunu got N12m, Temitope Alake got 7m and Shaguna George was given N2.5m.
Recall the Independent Investigative Panel was set up to investigate all human rights violations  and  police brutalities carried out by the Nigerian Police in the wake of the ENDSARS protest.
Meanwhile,NHRC has assured that more compensations and awards will be given out to petitioners whose case has been decided on at a later date.