Skip to content
You are here
Spread the love
The Deputy Governor of Kogi State and Olimene Attah Igala, Chief (Dr.) Edward Onoja (CIK), on Wednesday, paid homage to the New Attah Igala, HRM Prince Mathew Alhaji Opaluwa, bearing greetings from his boss, Governor Yahaya Bello.
Chief Onoja arrived the ancient Palace of the Attah Igala in Idah, accompanied by top government functionaries where he presented Kolanuts to the Attah. He remarked that his visit to the Attah on the First Day of December had a significant rooting, recalling an earlier private discussion between them which harped primarily on the unity, development, and prosperity of Igala Land, and Kogi State in general.
He stated that the Royal father’s ascension bear all the tell-tales of a success story following approval for the reconstruction of the Idah-Odolu-Enugu road in his dawning days as Attah. 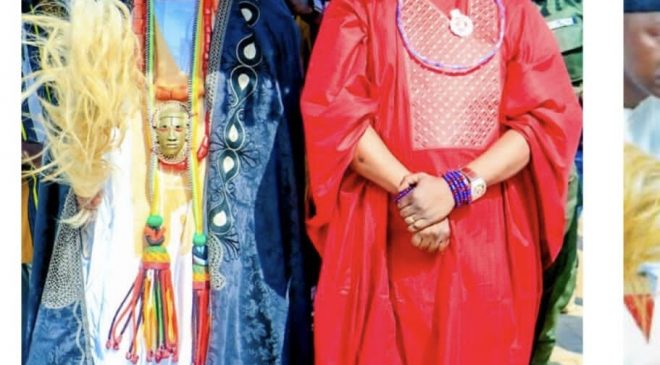 Chief Onoja then appealed that the traditional ruler sustain the Igala culture and traditions as both Priest and King, assured him of his support and that of his Principal, Governor Bello.
“I am trusting that the 28th Attah Igala will champion our collective advocacy for sustainable peace and development in Igala Land alongside his sacred duty to work for the unity, peace, and progress of the entire Kogi State,” he said.
Stressed that the Attah’s ascension was divine, Chief Onoja prayed God to grant him long life, health, wisdom, carriage, capacity, and the fortitude to sit long and fruitfully on the ancient throne of his forefathers. In an act of Goodwill upon the visit, Chief Onoja offered N2 million in support of 100 women.
After the presentation of kolanuts, the Attah prayed for Governor Bello and Chief Onoja for continued love, bonding, and synergy for the development of Kogi and Igala Land.
He appreciated the construction of Roads, Electrication, Security and Erosion control projects with special appeal to increase existing efforts towards supporting the youths and widows.
The royal father also drummed for support by all and sundry to help him tow Igala Land and Kogi State to greater heights. Also on ground to receive Chief Onoja were traditional chiefs, religious and political leaders, as well as other Sons and Daughters of Igala Land.