Skip to content
You are here
Niger State Governor and Chairman North Central States Governors’ Forum (NCSGF), Abubakar Sani Bello said he remained resolute and committed to seeing that the ruling All Progressive Congress (APC)retain power at the center as well as at the states and local government levels in the country.
Receiving a high-powered delegation from the Sen. (Dr) George Akume Contact Team at Government House, Minna, Governor Sani Bello stated that it was deserved of the North Central Geopolitical Zone to get fair bargain in the political arrangement of the nation. 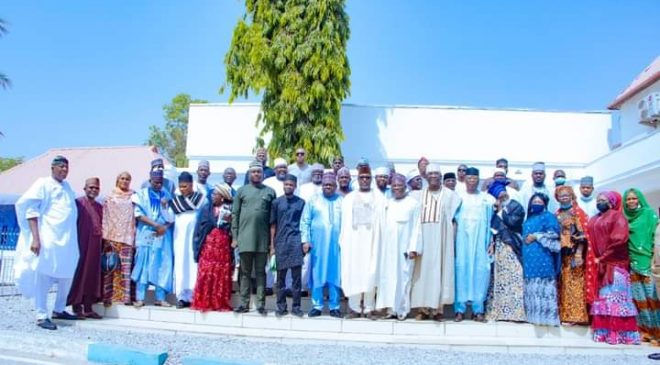 The Governor opined that the North Central Zone had been sociopolitically marginalized and unfairly treated in terms of Infrastructural development, noting that the region’s infrastructure has suffered immense deterioration because of its location as gateway between the northern and southern parts of the country.
“I feel the North Central have not been fairly treated. Politically we have been abandoned, we are neither here nor there in the core north or core south political calculations. We are hardly noticed even though the zone has always delivered ‘block-vote’ for the during elections”. He said.
He said, as food basket of the nation, the North Central Geopolitical Zone could comfortably feed the country and the whole of West Africa if the Federal Government outlines robust plans and makes deliberate efforts towards supporting agricultural programmes.
Governor Sani Bello said it was in realization of the fact that the zone was politically ‘neither here nor there’ in the equation that the party’s leadership in the region deemed it necessary to indicate interest and support aspirants from the region to vie for party offices including the chairmanship position.
The Governor assured that, as a leader to all, it was incumbent on him and the party to support any candidate from the North Central Geopolitical Zone with the requisite credentials and pedigree to not only unite the party but importantly retain power in 2023.
Earlier, the leader of the Sen. (Dr) George Akume Contact Team, Senator Jack Gyado said they were in the state to seek its support for Sen. Akume who is aspiring to become the National Chairman of the ruling APC.
He stated that Senator Akume has the quality, credentials and requisite experience to feel the void of the National Chairmanship position of the ruling party stressed that, as a retired Permanent Secretary, two term Governor, three term Senator and now a Minister, Akume possesses the pedigree to consolidate the party’s gains and achievements.
Senator Jack Gyado disclosed that Senator Akume has greatly contributed to the emergence and success of the ruling APC since its formative years and assured that the former Senate Minority Leader will deliver the region and the center for the party.
He, however, stated that for the Geopolitical Zone and Senator Akume to actualize the dream, the leadership of the Governor and the party in the region have roles to play in ensuring that the position of the National Chairman of APC is zoned to the North Central.
Senator Jack Tilley Gyado also congratulated Governor Sani Bello for his wonderful achievements in the state added that Nigerlites and people of the North Central Geopolitical Zone are indeed lucky to have such a dynamic, highly cultured and progressive leader.