Skip to content
You are here
The electorates in Nasarawa State turned out enmasse to accord a hero’s welcome to Governor Abdullahi Sule, who just returned to the state after his sojourn to the United States on a private visit.
A tumultuous crowd turned out at various designated spots along the Abuja-Lafia expressway, to give Engineer Sule a rousing welcome, signifying that, they are happy with the development strides of his administration. 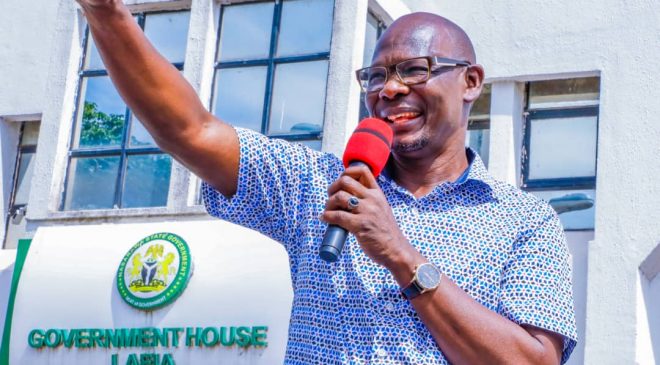 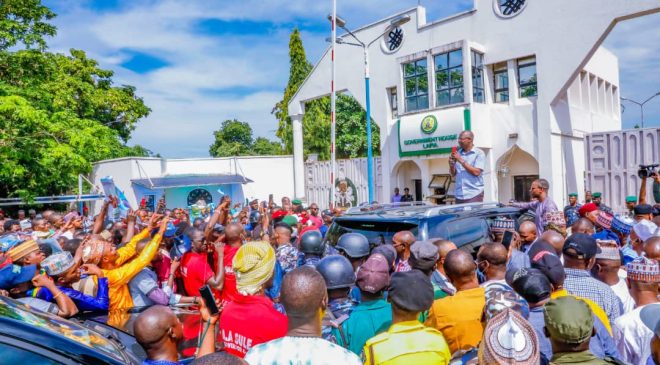 In Karu, Keffi, Kokona, Akwanga, Nasarawa Eggon and finally Lafia, supporters and admirers of the governor, turned up in a carnival of songs, dances and colours, to welcome Engineer Sule back home.
Addressing a mammoth crowd in Karu, Engineer Sule, expressed appreciation on the massive turnout of the people, stressed that for the people to come out in numbers to welcome him back, signified that the All Progressives Congress (APC), President Muhammadu Buhari and his administration, are on the right track, bringing about much needed development to the people.
According to the Governor, with a united APC, the party has no challenger in the 2023 general election, urging both elected and appointed officials, to be fair, just and to carry everyone along.
Indeed, the people of Nasarawa State, surprised the governor, whose intension was to return to the state unnoticed, but was treated to a resounding reception at every point along the route.
This open show of love by the people, may not be unconnected with the sterling leadership qualities of the governor, who has left no stone unturned in his quest for a better Nasarawa State, uniting the people, ensuring lasting peace and repositioning the state to become an emerging leading business hub in not only the North Central geopolitical zone but in the country at large.
For these and many other reasons, the people showed their appreciation by thronging to the road, to accord Engineer Sule a hero’s welcome.
The State Deputy Governor, Dr. Emmanuel Akabe, as well as the Speaker, Nasarawa State House of Assembly, Hon. Ibrahim Balarabe, alongside other prominent sons and daughters of the state, were at the Lafia entrance gate, to recieve the governor, as people from the entire Nasarawa South senatorial district, turned up to welcome the governor.
Addressing the tumultuous crowd at the entrance of the Government House, Engineer Sule, thanked the people for the show of love and for turning up in their numbers to welcome him back home.
An obviously elated Governor Sule, said the attitude of the people, is but a demonstration of their trust in the APC and his administration.
Recall that Engineer Sule travelled to the United States where he spent 13 days, working for the benefit of the state and its people.