The Director-General, Brigadier General Shuaibu Ibrahim has appealed to Lagos State Government to expedite action on the construction of a befitting Orientation Camp for NYSC Scheme in the state.

He made the plea today when he paid a courtesy visit to Lagos State Governor, Mr Babatunde Olusola Sanwo-Olu in his office at Ikeja. 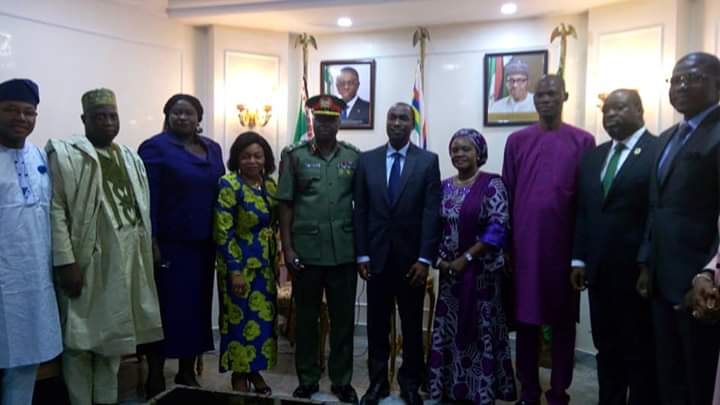 He stated that there was need to develop the 10 hectares of land which has been allocated for the Orientation Camp project in Agbowa, Ikorodu, by the State Government since 2015.

The DG, who said Lagos State remained the largest employer of Corps Members nationwide also commended the State Government for its assistance to the NYSC in Lagos through renumeration for Corps Members and awards to deserving Corps Members during passing-out from national service.

The Scheme has designed a 7,000 Corps capacity and 6,000 Camp Officials prototype which was presented to the immediate past Lagos State Governor, Mr Akinwumi Ambode.

General lbrahim however urged the state government to provide land for the construction of Skills Acquisition and Entrepreneurship Development Centre in Lagos where Corps Members would be trained in various vocational skills.

He said this would reduce the rate of unemployment among the youths and also make Corps Members employers of labour.

“Lagos State is the largest employer of Corps Members in the country and NYSC won’t joke with Lagos State”, the DG added.

The Governor, who was represented by his deputy, Dr Kadiri Obafemi Hamzat, advised the NYSC Scheme to involve Corps Members who are professionals in building technology to design the prototype for the Orientation Camp.

He said the ministry of Special Duties will coordinate the activities of the Corps Members on the project.

The Governor canvassed for the introduction of entrepreneurship training for Corps Members while in school which he said would help them alot.

“We will assist the NYSC in building the future of our children because we have a lot of responsibilities to develop the scheme” the Governor added.