The National Youth Service Corps has charged its information managers to project the good image of the Scheme with regards to its contributions to national unity and development.

The scheme also urged them to speed up with evolving trends in corporate image management, added that NYSC Management would continue to provide avenues for capacity building for staff. 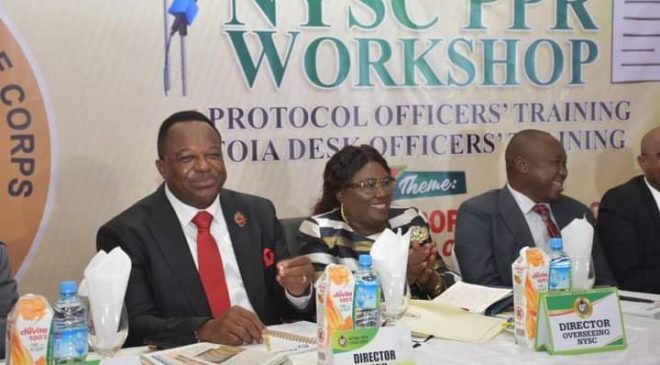 She further advised them to step up the monitoring of the social media in order to correct misconceptions as well as fake stories against the Scheme.

“Let me remind you of the need to continue to leverage on both the traditional and new media to ensure effective publicity for the contributions of the Scheme to the socio-economic development of the country”, she said.

Uba, who had earlier commended the Public Relations Officers for projecting the image of the Scheme, urged them to respond to emerging challenges, and peculiarities of the operating environment.

She called on the workshop participants to share experiences and step up efforts at sustaining harmoniums relationship with the NYSC critical stakeholders.

In his remarks, the Director, Press and Public Relations, Mr Eddy Megwa said the annual NYSC Press and Public Relations Officers Workshop has over the years served as a veritable platform for Officers of the Scheme, to acquire requisite knowledge on contemporary issues influencing the practice of the profession with a view to ensuring effective professional management of the corporate image of the Scheme.

He said the theme for this year’s workshop; “Enhancing the Corporate Image of NYSC: Quintessential Roles of Public Relations Officers”, was chosen to underscore the importance of efficient Public Relations personnel in the Scheme’s corporate image management.

Megwa said the training will enable the participants stay afloat on their duties and ensure that nothing is left to chance in managing the image of the NYSC.

He added that in the area of implementation of Freedom of Information Act among MDAs, NYSC is rated among the best nationwide.

In the same vein, the strict adherence to protocol rules of engagement in the conduct of NYSC programmes and activities is such that must be commended among our State and NDHQ officers”, Megwa said.

The Director stated further that the relentless push by the Press and Public Relations Officers for a voice to bridge the gap of inadequate publicity for the numerous achievements and contributions of the Scheme to national cohesion and development resulted to the birth of the NYSC Radio and Television Stations.

“I must put on record that these media are indeed being utilized to extensively publicize the Scheme”, the Director stated.

Mr Megwa thanked the NYSC Overseer and the Management for the support given to the Scheme’s PR Officers in the discharge of their responsibilities, while noting Management’s commitment to ensuring that the NYSC Radio and Television Stations remain afloat.

In a vote of thanks, the Director Special Duties, Alhaji Musa Abubakar, represented by the Deputy Director, Stock Verification, Mrs Sarah Kure appreciated the NYSC Overseer and top management for granting approval for the workshop, saying training for workforce is the surest way of achieving improved efficiency and productivity of staff in any organisation.

While assuring the management that the participants will reciprocate this gesture by re-dedicating themselves to work and utilizing the knowledge gained to improve on their schedules.

“By so doing, we will ensure that NYSC is taking higher on contemporary pens in Public Relations and Protocol best practices”, he said.