The Governor of the State of Osun, Adegboyega Oyetola, has charged the leadership of the Federal Character Commission on the need to ensure equity and fairness in the discharge of their duties.

The Governor also tasked the Commission on equitable distribution of the nation’s resources ranging from commonwealth, infrastructure and appointments. 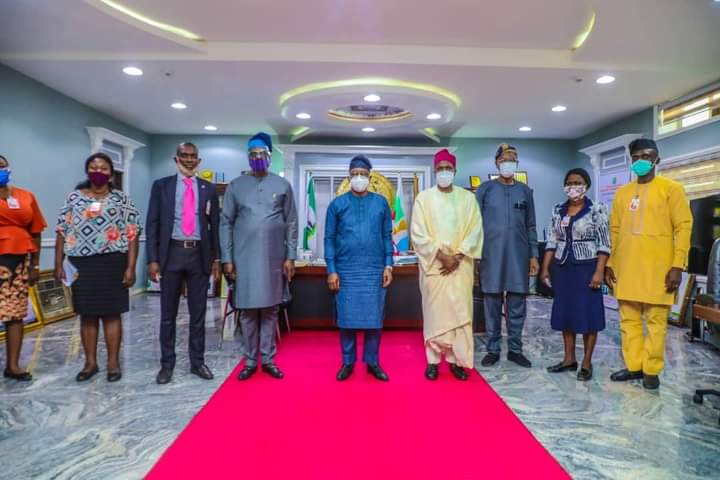 Oyetola gave the charge while receiving the delegation of the Commission led by its Commissioner from Osun, Barrister Adeoye Rasak, in his Abere office, Osogbo.

Oyetola said it was incumbent on the leadership of the Commission to instil the culture of equity, fairness and evenness among the governments’ agencies and reflect same in its dispositions.

“So my charge is for you to ensure equitable distribution of the nation’s resources be it appointment or infrastructure. I am glad that you said there is a reasonable level of cooperation between your Commission and our Ministries, Departments and Agencies (MDAs).

“The observation before was there was no cooperation, but as a government we are determined to ensure that there is cooperation on whatever that can aid the development of our State. There has been a cordial relationship not only between your Commission and the State but also with all the agencies working in our State. Our state is very peaceful”.he said.

Congratulating the new Commissioner of the Commission from the State, Adeoye Rasak, Oyetola urged him to ensure that Osun get a fair share of whatever belong to the State.

He implored him to correct the palpable high-handedness in the allocation and sharing of positions belonging to the State, saying “as I congratulate you on your appointment, I want you to ensure that we get a fair share of whatever belongs to us. You are in the position to get the best for us. We are not in the position to know in terms of distribution but you are the one that will know”.

Oyetola stated further: “We have heard instances of non-citizens taking the slots of Osun when it comes to positions distribution. That is not fair, that is criminal. So, you need to seriously look into that, moving forward.

“Please, try to do an analysis of all positions and assess how far we have been able to occupy the positions, and if we have any interloper, let us know so that such would be prosecuted for fraud”.

Earlier, the Commissioner and leader of the team, Barrister Adeoye Rasak, lauded the State government for creating an enabling environment for all the agencies of government operating in the State to thrive.

He commended the Governor for the sustenance of harmonious relationship between the State and the Commission.

Rasak called for improved working relationship between the Commission and the MDAs in the State.

“I am happy for the harmonious relationship between the local governments, State governments and the Federal Character Commission.

“I want to appeal to the State that we need the support of the government to ensure that MDAs undertake prompt rendition of nominal roles.

“I want you to know that the Federal Character Commissioner is established to serve governments at various levels. Therefore, citizens of Osun should explore the various opportunities to apply for jobs so as not to leave Osun marginalised in the scheme of things.

“The Commission receives complaint from an aggrieved individual or group or community or even State. So, our people should explore that window of opportunity to lay their complaints to FCC with a view to redressing them. The support of citizens is needed to ensure Nigeria’s oneness through FCC,” Rasaq said.