I have just read the attached riposte, by Daily Trust newspapers and I saw a video of FFK’s response and an additional response from FFK where he stated emphatically that he had no apologies to offer the journalist or any interest because the journalist was rude.

Well, I disagree with Both FFK and the journalist (and of course the journalist’s employer), not just with FFK as many have expressed.

It is evident that FFK overreacted to the question thrown to him by the journalist. FFK is reported to be taking a tour of some states and at Calabar, after his tour, a journalist (Eyo Charles of Daily Trust newspapers) ask FFK who was bankrolling his tour of the states. 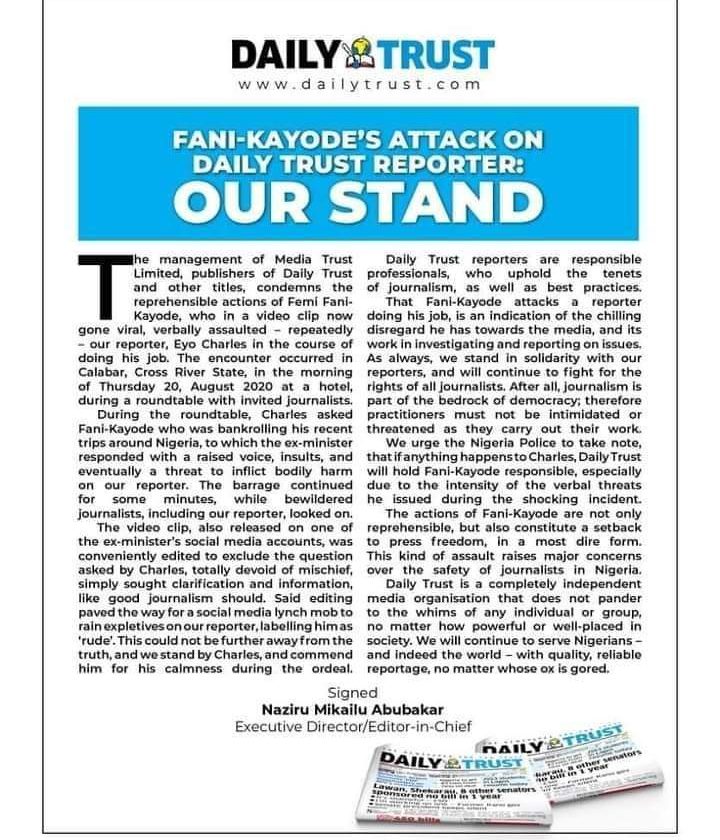 I gleaned from what I can piece together from reports and clips that FFK lampooned the journalist, stating that his question was both an “assertion and an insult”. I learnt that FFK’s reaction was almost bordering on a threat to the journo. If this is true, I repeat that FFK overreacted, he should have been more temperate in reacting to the assertion and the insult. His claim that Presidents Trump and Obasanjo would have reacted in a more vitriolic manner if they were so circumstanced as him, even took the the wind out of the sail of his counterfactuality.

However, I am more disappointed in the journalist (and certainly more disappointed in his employer) because he could have framed his question differently. I consider it rude, assertive and insulting for Mr. Charles to ask FFK who was bankrolling his trips to the states. I mean, the former Special Adviser to the President and former Minister of the Federal Republic was never declared bankrupt, in which case that question would have been appropriate but still framed in a more civil and professional manner.

I think the hoopla around this matter needs to be re-cinsidered more objectively by those who had earlier already took positions by taking a swipe at FFK and glorifying the journalist. Mr. Charles goofed and I do not think we should overlook his gaffe simply because he’s a journalist. For crying out loud, what happened to journalist ethics. It is a fact that the Constitution empowers us as journalists to hold the government accountable to the governed by illuminating the social fabric in contexts that make meaning, but the groundnorm has not accorded us the liberty to be discourteous.

To every right there is a responsibility (and I recognise that we all are fallible), but I think every journalist should discharge the burden of proof that he belongs to a profession peopled by gentlemen and social entrepreneurs. We will edify our profession better if we self-regulate.