Skip to content
You are here
Spread the love
More victims and eyewitnesses of the alleged Lekki Toll Plaza shooting by soldiers have taken to the social media to share their accounts of the incident.

They claimed many protesters were killed. 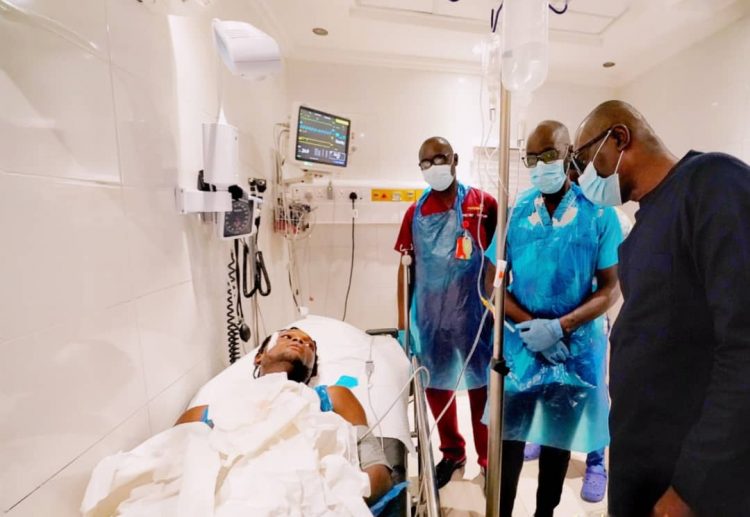 One of them, Anthony Ogbe, who said he was shot in the chest on the night, is currently receiving free treatment at Grandville Medical and Laser Centre, Lekki.

He said several hospitals rejected him before he ended up at Grandville.

In a short video shared by a non-governmental organisation (NGO), Kokun Foundation, Ogbe said he was one of those shot by soldiers.

“It was a soldier that shot me at Lekki. I was rejected from different hospitals before I got admitted here and my life was saved,” he said.

He said he was being treated free of charge.

“They didn’t collect money to treat me; neither do they know my people.

“I was taken to the theatre so that they could bring the blood that is in my chest out, and that is what is passing through this pipe.

“I thought I had died because my blood was just gushing out like a pump. I never knew I would still be alive.

“We thank God for this hospital. Glory be to God.”

He told Isha Sesay during an Instagram live interview that he ran and laid on the ground behind some of the soldiers.

Joseph said he noticed that some of the soldiers were hooded, adding that one of them pointed a gun at him where he laid on the ground and ordered him to stand up.

According to Joseph, he saw at least four dead bodies carried away by the soldiers from his hiding point, adding that 15 persons were confirmed dead during the incident.

He did not say who did the confirmation.

He claimed seeing soldiers gun down five people by a small waterside close to the tollgate.

He said: “Around 3pm on Tuesday, we heard news right on the ground of the tollgate where all of us were cleaning. We were volunteers.

“We also heard that there was an initial plan that some soldiers were going to come for this Crocodile Smile operation so the billboard that was displaying went off around 3:30pm. 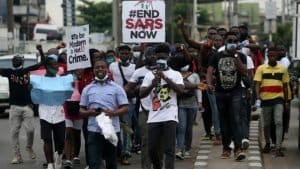 “Then, the LCC security agent came out. I saw them with my own eyes removing the cameras. So, I confronted one of them, they said they were putting it off because some of the stuffs had  broken down and by 6pm, we expected the street light to turn on as usual, but no street light was on and it was turning dark.

“I started feeling something was wrong. We had this mobile toilet that was stationed around the place and truck normally came to offload it. So, when a truck came, we thought it had come as usual to offload and put new ones, but the toilet was taken away without replacement.

“All of a sudden, we heard gunshots from VI axis. They were shooting sporadically. We had a large crowd so the lady that was on the speaker was like everyone should calm down, that apparently this should be the Crocodile Smile people shooting.

“Everyone sat on the floor and we raised our flags up. We were singing the national anthem.  They came shooting directly at us and it was scary. So some people were running away.

“I ran with my people to a safe place. We lay on the floor and one of the soldiers was close to me with a pointed gun, saying what did I want, and that I should get up. I told him I could not get up.  Right in front of me, I saw someone drop dead.

“I also saw someone wearing mask (hood) in soldier uniform. They were concentrating on the large crowd this time around. They warned them to either run away or be killed.

“They killed some people right in front of us. They didn’t say anything; they were just shouting, ‘Move!”

’We didn’t know they put off the cameras because they already knew the soldiers were coming. We asked everyone to lie down, begging the LCC to turn on the light but they refused until some people started dropping dead.

“We asked them if we could take these people to the hospital. They refused, but one of them said they should allow us.

“We carried the injured with the flags from the tollgate to Lekki Roundabout. Still, other people were getting injured. So, after dropping some of the injured in an available cab, I had to go back to help others.

“On my way going, one of the soldiers asked me to go back or he would waste me. I had to beg with the flag I was holding.

“One of the military guys told the others to drop their guns so we should run. The leader asked me to jump the fence and run, which I did. The ambulance came but unfortunately the military men chased them back.

“I saw the bodies of the dead protesters taken away by the soldiers. I saw at least four. At a point, they begged us to leave but we didn’t. We sang the anthem with our flags up in the air. They also used teargas on us.

“I saw 15 bodies initially. Later they were confirmed dead. About 25 of them were rushed to the hospital.”

Asked if he was not scared that his face was exposed in the interview, Joseph said he was not because he was speaking the truth.

“There were some people who hijacked the protest, but there were good people like us at the tollgate who didn’t do anything. The street boys were the ones stealing and causing havoc.

“Other than the protest being hijacked, something happened before Tuesday when a truck came carrying eight concrete pillars of poles, bashing some cars and some people were actually injured.”