Skip to content
You are here
Spread the love
The Federal Government on Friday commended the administration of Governor Adegboyega Oyetola of Osun for prioritising quality, and maintaining standard in service delivery.
The FG also lauded the State for prioritising people’s welfare and wellbeing over other obligations. 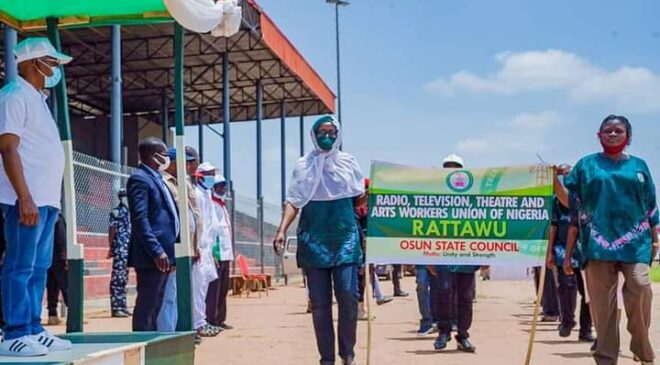 The commendations were given by the Minister of State, Budget and National Planning, Prince Clem Agba, during his courtesy visit to the Governor in Osogbo.
The Minister who expressed satisfaction at the leadership style of Governor Oyetola, said the quality of the infrastructure development across the critical sectors was an affirmation of the fact that the government was committed to giving the State a facelift, especially in the area of socioeconomic development.
Agba maintained that the Administration of Governor Oyetola had distinguished itself as a government with a clear vision to transform the State and bring the desired succour to the citizenry through prompt and timely delivery of democratic dividends.
According to him, the quality of the  infrastructure projects of the Administration had been attested to as one of the best in the country in view of the State’s strict adherence to international best practices and standards.
“Since I have been in Osun, I have seen a lot of infrastructure developments springing up here and there, particularly the quality of the roads that I drove on. The quality of the roads is very good from what I have seen.
“I have seen how the roads were constructed against being destroyed by water and other things — as we all know that water is one of the major factors that destroy roads.
“I have seen how water is being protected through standard drainages across some of these roads. Moreover, I have found a high level of integrity in Osun citizens as they are not only hard-working people but very transparent and unique.
“As we all know, Osun is a very beautiful and peaceful State. It is a State that a lot of people should come to have some rest. Osun is a good place and her people are very accommodating and hospitable.”
The Minister who pledged the continued support of the Federal Government, disclosed that about five ongoing federal roads in Osun were under the supervision of the ministry.
He disclosed that 50 percent of the required funds had been released to ensure quick completion of the roads.
According to him, the ongoing roads reconstruction being handled by the Federal Road Maintenance Agency (FERMA) in Osun were Osogbo/Sekona/Ode-Omu/Gbongan road; Gbongan/Iwo/Oyo road; Osogbo/Okuku/Ila-Odo Kwara boundary road;Ife/Modakeke/Ifetedo Ondo boundary road; and Ife/Sekona road.
He said the ministry was ready to strengthen the existing collaboration between it and the State government as part of efforts to record more success in the future..
Prince Agba also assured that the State stand to benefit more from 377 rural roads in the 266 communities in Nigeria,  as the ministry was currently executing over 30,000 projects across the country.
In his remarks, Governor Adegboyega Oyetola, reiterated the administration readiness to continue to do things that would further make life more meaningful, productive and worthwhile for the citizens.
Oyetola who expressed gratitude to the Minister for deeming it fit to visit despite the fact that he was in the state on a different mission, said “your visit is an indication that our government has a robust relationship with your ministry and others at the federal level.”
The Governor commended the Minister on his good works since assumption of office, saying it was a thing of joy that the Ministry had been moving from strength to strength under his leadership.
The Minister was accompanied by his wife, Princess Catherine Agba and his Chief Protocol Officer Mr. Henry Nnoshiri.
Others in attendance were the Deputy Governor, Mr. Benedict Alabi; Secretary to the State Government, Prince Wole Oyebamiji; Chief of Staff to the Governor, Dr. Charles Akinola; Commissioner for Finance, Mr Bola Oyebamiji; Attorney General and Commissioner for Justice, Barrister Femi Akande; Commissioner for Economic Planning and Budget, Prof. Olalekan Yinusa; Special Adviser to the Governor on Economic Planning and Budget, Mr. Kolajo Aderemi.