Skip to content
You are here
Spread the love
Kwara State Governor, AbdulRahman AbdulRazaq on Thursday said non-contact sporting activities have resumed in the state as part of the gradual easing of COVID-19 restrictions, adding that his administration remain committed to reviving sporting infrastructure to create a conducive environment for talents. 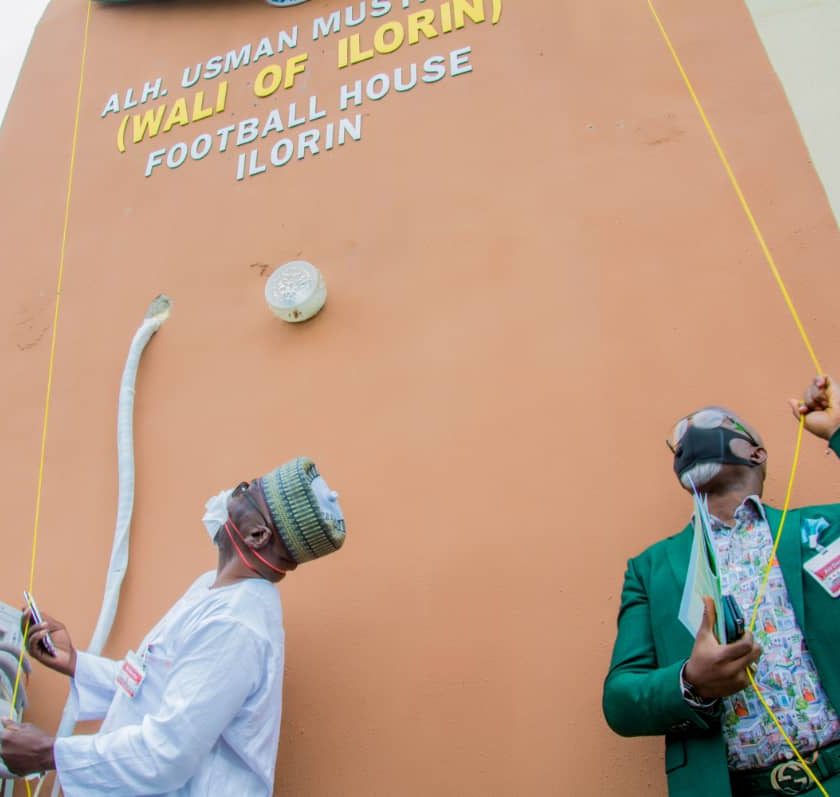 The Governor stated this in Ilorin, the state capital, when he played host to the President ,Nigeria Football Federation (NFF), Amaju Pinnick and members of his entourage who were in the governor’s office on a courtesy visit shortly before the official inauguration of the Football House in Ilorin.
“We have since approved the reopening of non-contact sports as we gradually return to a new normal,” he said, hinting at the government’s lifting of the ban on athletics, table tennis, Badminton, Squash Racket, Golf, Cricket, Softball, and Baseball, among others.
The football house, the first and only standing one in Nigeria, was constructed by the Kwara State Football Association with the financial support of the AbdulRazaq administration and Barrister A.U Mustapha SAN, an Ilorin-born football enthusiast who is a member of the NFF and the Confederation of African Football (CAF).
The Governor commended Pinnick for his great performance at the NFF and his long-standing contributions to the round leather game, stated that “We have seen transformation in football since you came in. We are glad that we are benefitting in Kwara and continue with the legacy being laid down especially with the football house.”
He also commended the Aiteo for its contributions to football especially in Kwara State, and said the government remained grateful to and would immortalise former Governor George Inni for the sport facilities he built in Kwara.
“Also we have not forgotten Rashidi Yekini, so we also look forward to getting something good to immortalise him,” the Governor added.
Speaking on the football house, he said: “For me, our gathering here today is about two major things. The first is to commission a facility for public use. The commissioning comes after months of hard work by the leadership and members of the Kwara State Football Association and some investments by the government.
This investment aligns with the decision of our administration to restore the glory of our state across various sectors, including sports. This has led to massive rehabilitation works on roads, hospitals, schools, and sporting facilities that capture the essence and history of our state. One of them is the Baseball Court.
“I want to reassure sport lovers that the same gesture will be extended to the long-abandoned indoor sports hall at this stadium while new facilities would also be put in place.
“The second is about rewarding good legacies. I have been briefed that this facility is to be renamed after the Wali of Ilorin, Alhaji Usman Mustapha. I believe this is befitting.”
He then commended A.U Mustapha SAN for his support for the furnishing of the facility, hailing him for being a pride of the state.
Pinnick, for his part, said his team at the NFF is determined to develop football in Nigeria, particularly at the grassroots level.
“When Barrister A.U Mustapha and I decided to go to Accra, Ghana, one of the requests we made was to have a football house in all the 36 states of the federation. We started with six and today by the special grace of God we’re commissioning the first one in Kwara State,” he said.
“This is quite symbolic because we have the governor that cares. It is quite epochal because we have a governor that believes in the development of football. This is made possible because the governor understands that the football is part of the large ecosystem in which a player can make a career and channel it into a productive youth not just for entertainment but also feeding their family.”
He also made an appeal for the renaming of Kwara State Stadium Complex after the late Super Eagles striker Rashidi Yekini.
Pinnick meanwhile presented the last batch of Nigeria’s most celebrated jersey to the Governor ahead of the presentation of a new national jersey next week.
The President CAF Appeal Committee , Barrister A.U Mustapha, expressed optimism that with the renewed support of Governor AbdulRazaq’s administration in the sports sector, Kwara would soon regain its lost glory in the sector.
Kwara Football Association Chairman Abdullahi Idris, on his part, appreciated the NFF for facilitating the building from Aiteo and thanked the state government for continuous support to the sports sector.
Idris specifically commended the Governor for approving the construction of the facility even before he ever met with the Kwara Football Association team, added that “this shows that all the Governor cares about is fixing things for the good of our people.”