Skip to content
You are here
Spread the love
Niger State Governor, Abubakar Sani Bello has called on the Judiciary and the Legislature to come up with stiffer penalties on bandits, kidnappers and their informants in the state.
Governor Sani Bello stated this while presiding over the swearing-in of Justice Aisha Lami Bawa Bwari as the Chief Judge of the State at the Government House, Minna. 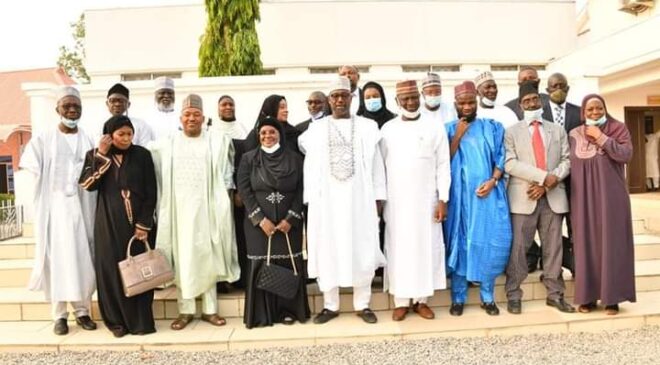 The Governor who noted that banditry and Kidnapping activities are carried out in conjunction with members of the communities, stressed that the informants should as well undergo the same penalties with both the bandits and the kidnappers.
“With the increased insecurity in the interlands especially in our rural areas where lives are lost on daily basis due to banditry and kidnapping, the parliament and the Judiciary should come up with stiffer penalties for those involved in these activities especially the informants.
“It has come to our notice that most of these heinous crimes are being executed in conjunction with members of the communities. So we are seriously and strongly suggesting that kidnappers, bandits and the informants should have the same punishment because without the informants the banditry activities would extremely become difficult”, he started.
He said a meeting would be scheduled with the State Assembly on what necessary steps to take, added that the Judiciary would ensure the execution of the decisions taken.
The Governor then prayed for guidance and protection for the newly sworn-in Chief Judge so as to carry out her duties effectively and efficiently.
Speaking after the swearing-in, the Chief Judge of the State, Justice Aisha Lami Bwari said she would ensure the transformation of the judiciary by giving the right and condusive working environment among other things.
It could be recalled that late last year Justice Aisha Lami Bwari was sworn-in  as the Acting Chief Judge of the State.