Skip to content
You are here
Spread the love
Kwara State Governor, AbdulRahman AbdulRazaq has said the state is committed to attain the Sustainable Development Goal (SDG) 6, which is attainment of universal and equitable access to safe and affordable drinking water.
AbdulRazaq also said the administration was working hard to end open defecation in Kwara State with improved access to adequate and equitable sanitation for all by year 2025. 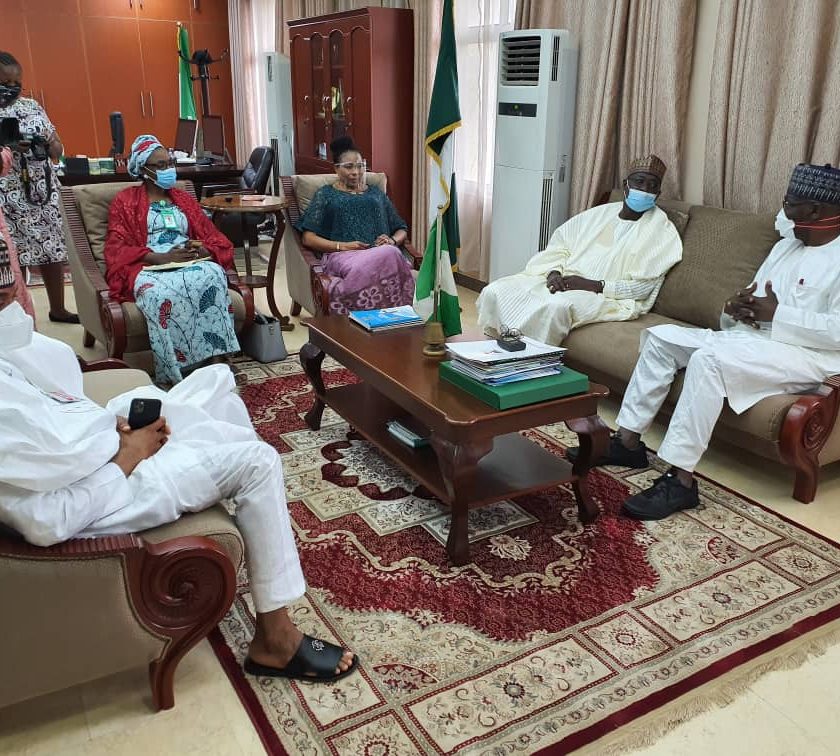 The Governor restated the commitments during a visit to the Minister of Water Resources Suleiman Hussein Adamu in Abuja, the federal Capital city, where AbdulRazaq sought the support of the ministry for the state to achieve the goal.
The administration has restored pipe borne water in the capital city Ilorin and other major towns in the state after many years while works are ongoing to deepen availability of safe drinking water in other parts of the state.
Accompanied on the visit by his Senior Special Assistant on SDGs, Dr Jamila Bio Ibrahim, AbdulRazaq also requested the technical support of the Ministry for Kwara’s participation in the FG-led Partnership for Expanded Water Supply and Hygiene (PEWASH) and Clean Nigeria programmes.
The Governor urged the ministry to support Kwara State government to qualify for the funding of a reticulation project that aligned with the Ilorin Master Plan that is being prepared.
The Minister, on his part, assured the Governor that the N10 billion Tada-Shonga irrigation project remained priority while the Pategi Water Works will be completed next year amongst other ongoing federal government’s projects in the state.
Adamu, who applauded the efforts of the Governor across various sectors, said Kwara would benefit from the COVID-19 interventions of the federal government such as construction of public toilets, hand washing facilities, solar water facilities.
He said Abuja would also engage 100 youths per local government area of the state as volunteers to support the National Hand washing Campaign.
The Governor, meanwhile, has visited the newly appointed Director General of the National Emergency Management Agency (NEMA) retired Air Vice Marshall Muhammadu Muhammed to seek support for victims of recent flooding in the state, among other issues in the state.
The NEMA DG, who commended AbdulRazaq for the visit, said the governor’s request would be treated as an emergency.
In a related development, the Kwara state Deputy Governor ,Kayode Alabi today (Tuesday) led a government’s delegation to commiserate with victims of the recent flooding in parts of Ifelodun (Oro Ago) and Edu (Lafiagi) local government areas of the state, following the downpours over the weekend.