Skip to content
You are here
Spread the love
More than 50 percent of health complications reported across public hospitals resulted from poorly treated malaria-related cases, Governor AbdulRahman AbdulRazaq said on Thursday, reiterating his commitment to the global fight against the disease that experts say is number one killer in sub-Saharan Africa.
The Governor spoke in Ilorin at the official launch of house-to-house distribution of 2.3million insecticide treated mosquito nets (ITNs) which the state received from Global Funds as a result of its payment of relevant counterpart funds. 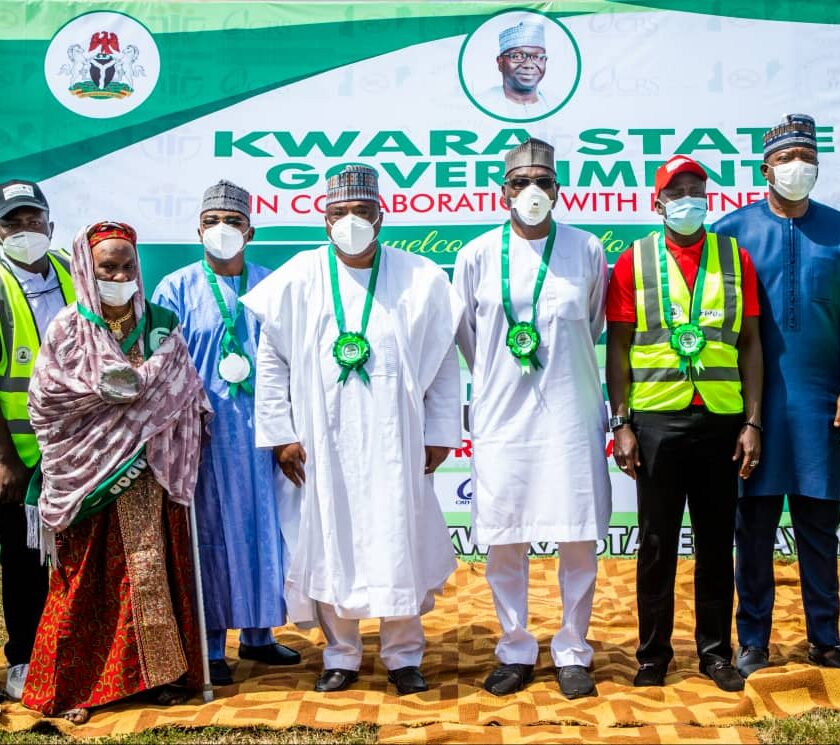 AbdulRazaq said his administration has paid huge counterpart funds to key into various initiatives that would afford people of the state access to basic healthcare, including the free malaria programme recently launched.
“A little over one year ago, we invested millions of naira in paying counterpart funds to key into various basic healthcare programmes. N82m of that amount was meant for the anti-malaria initiative of the Global Fund. What we have in return are 2.3million insecticide treated nets worth over N3.3bn, among other socioeconomic benefits,” AbdulRazaq said at the event held at the open field of Government House Ilorin.
“Today, we are flagging off the house-to-house distribution of these nets across our state. To do this, we have engaged at least 5,000 persons who will get paid for doing so.
“Malaria is a major killer disease in sub-Saharan Africa. It has also proven to have adverse economic effects. This is why we are so interested in fighting it. However, it is cheaper to prevent malaria than curing it. One major way of preventing the killer disease is the use of insecticide treated nets. It is safe for use and I urge our people to use it.”
AbdulRazaq also commended all partners, volunteers, and net advocates, especially the former Minister of State for Health Hajia Amina Ndalolo for their efforts in the campaign.
The Governor later handed units of the ITNs to some families before proceeding to sleep in a demo mosquito-netted bed at the event — a symbolic gesture to demonstrate the safety of the ITN and encourage citizens to use them.
Minister of Health Dr Osagie Ehanire, for his part, said Nigeria has continued to witness appreciable progress in malaria control and elimination efforts as the rate of malaria infection now stands at 20% in Kwara State.
“Kwara State is one of the three states selected to benefit from the 2020 mass insecticide treated nets (ITNs) distribution campaigns aimed at delivery of 2.3 million ITNs to beneficiaries with the support of Global Fund. Furthermore, two LGAs (Asa and Moro) will simultaneously be used to carry out the New Net Project evaluation that will involve monitoring the impact of the new generation ITNs on malaria indicators,” he said, commending the political support from the Governor.
Speaker Kwara State House of Assembly, Engr Yakubu Danladi Salihu, said the payment of counterpart funds and other investments have changed the state’s narrative in the health sector.
Former Minister of State for Health and Kwara Net Ambassador Hajia Amina Ndalolo encouraged all female political appointees in the state to promote the use of ITNs to enable the state achieve the result of its investment in the health sector.
Kwara State Commissioner for health Dr Raji Rasaq said engagement of over 5000 citizens in the house-to-house distribution model across the 16 LGAs will be of immense economic benefits.
“Governor AbdulRahman AbdulRazaq’s sustained injection of fund into the health sector to drive the provision of health care needs to the populace is one without a match in the history of the state,” he added, reeling out details of unprecedented efforts of the administration in the sector.
In their goodwill messages, Ernest Nwokolo of the Society for Family Health, Diwe Ekweremadu of Catholic Relief Services, and Abdullahi Nageri, the Programme Manager State Elimination Programme, commended the state government for the partnership which they said had yielded positive results.
They then urged the Governor to continue to push forward the campaign to eliminate Malaria in Kwara State.