Skip to content
You are here
Spread the love
The National Youth Service Corps and the Ned Nwoko Foundation have begun talks on a partnership for the control of malaria in the country.
The proposal came today when the Chairman of the Foundation, Prince Ned Nwoko, paid a courtesy visit to the NYSC Director-General, Brigadier General Shuaibu Ibrahim in his office in Abuja. 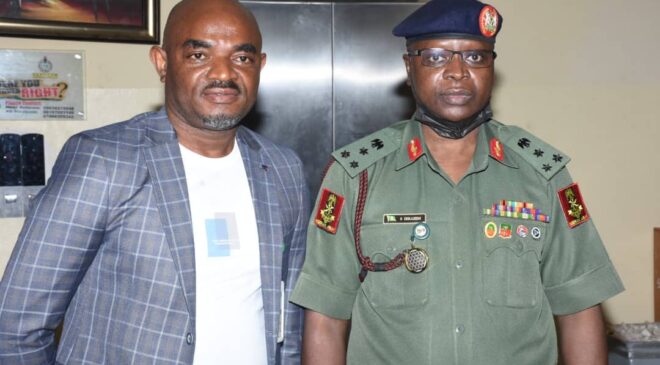 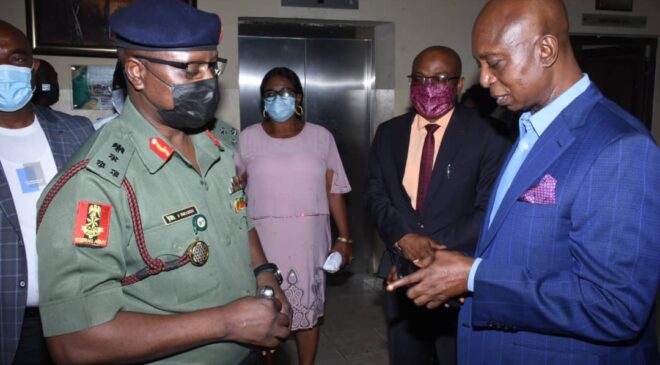 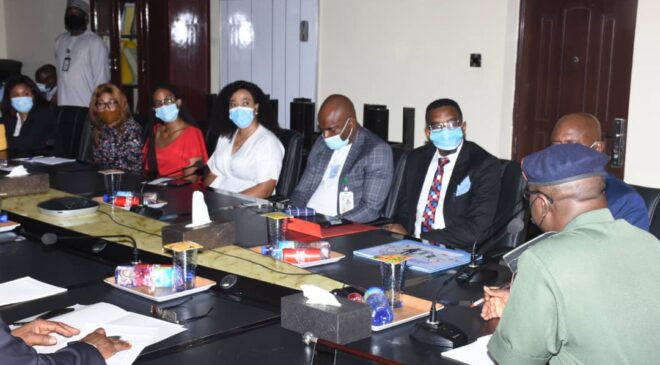 Nwoko, who described malaria as endemic with about 500,000 deaths resulting from it annually, said the Foundation was determined to tackle the disease in Africa, beginning with Nigeria.
He stressed the need for effective sensitization of the public on measures to curb the high rate of malaria attack in Nigeria, especially the creation of clean environment that would not serve as breeding ground for mosquitoes.
“Research has revealed that malaria and mosquitoes are not natural to us: they can be eradicated. The first thing is to address the cause, mosquito, which breeds and multiplies in dirty environment,” he said.
The Chairman lamented the huge amounts of refuse dumped all over the country thereby posing great risks to health, and explained that the first strategy mapped out by the Foundation was to address the issue of sanitation, including effective waste management.
According to him, the plan included the siting of a multi-functional waste recycling plant in each Local Government Area of the country to turn wastes into plastic products and paper as well as generate energy from same.
He added that the next step would be aerial and land fumigation across the country using chemicals that are harmless to humans with the aim of eliminating mosquitoes as well as maintain clean and healthy environment.
Nwoko also disclosed that the Foundation would be driving research on malaria vaccine in Nigeria, adding that trials were already going on in some countries. He expressed the hope that the efficacy of the vaccine would be determined by the end of this year.
The Chairman further announced plan to submit a Bill on malaria control to the National Assembly.
He said the Foundation considered NYSC as a worthy partner for the project in view of the huge Corps manpower at its disposal and its widespread presence in the country.
“NYSC is the largest employer of human labour and we will need your support. There will be a need for a technical team of our Foundation and NYSC for the actualization of this project”, Nwoko said.
Responding, the NYSC Director-General, Brigadier General Shuaibu Ibrahim Ibrahim commended Ned Nwoko for his contributions towards making Nigeria a malaria-free country.
“You are doing so much; continue to fight for the betterment of our country”, he said.
Ibrahim added that Corps Members had participated in several national assignments including health-related ones with enviable track records of performance.
He said the successes recorded by the Corps Members informed Federal Government’s decision to appoint NYSC to some of its Committees, including the ones on the Mambila Hydro-Power Project and the Alternate School Programme.
He added that the Scheme mobilized more than 350,000 Corps Members annually for national development, while their potentials are being explored for income generation for the country.
Also during the visit, the President, Actors Guild of Nigeria, Mr Emeka Rollas commended the Director-General for his tremendous achievements in managing the affairs of the Scheme.
He also commended Corps Members’ contributions to national development, especially in the health sector.