Skip to content
You are here
Spread the love
Niger state Governor ,Abubakar Sani Bello has said with the renewed zeal amongst the security agencies in the country and the support of the Federal Government, the security challenges in the state will soon be over.
Governor Sani Bello made this known in an interview after a special prayer session for God’s intervention to bring an end to the insecurity that has bedevilled parts of the country ,held at the Minna Central Mosque.
He urged everyone to remain calm as the state has received tremendous support adding that with the present support and the new confidence among the security agents, the internally displaced persons (IDPs) are returning  to their homes to live their normal lives.
“I am calling on the people to be calm. In the last 48 hours we have received a lot of support with regards to security agents from the Federal Government; I believe they are mobilizing themselves.
“I am very confident with the zeal I can see from the security agencies, I believe everyone will soon be back to their homes and farms”. 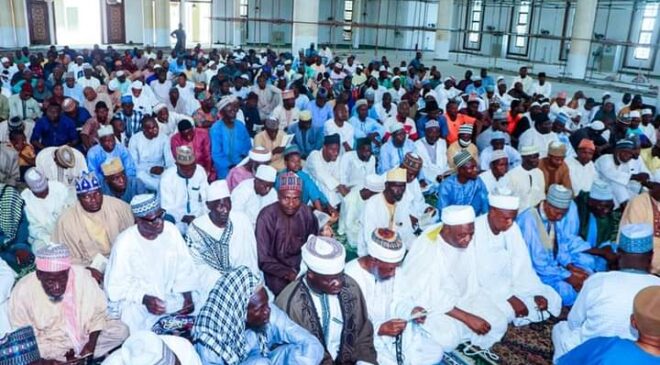 He explained that some of the recently  displaced persons, have returned to their homes while others have been relocated close to their homes.
The Governor expressed hope that with the special prayer and all the measures taken by government, insecurity issues will end soon.
Top government functionaries that attended the special prayer session included the state deputy Governor, Alh. Ahmed Mohammed Ketso, Secretary to the State Government, Alh. Ahmed Ibrahim Matane, members of the state executive council, and the Emir of Minna, HRH. Umar Faruq Bahago.
The Chief Imam of Minna Central Mosque, Mallam Ibrahim Isah Fari led the group of Ulamas and other Muslim faithful in the prayers which dwelt on recitation of some verses from the Holy
Qur’an.