Skip to content
You are here
The National Youth Service Corps has restated its readiness to uphold the sanctity of its mobilisation process.
It said it would resist every form of sharp practices from some Corps Producing Institutions in some African countries, while soliciting the support of the Federal Ministry of Education, Ministry of Foreign Affairs and the National Universities Commission in fighting the battle to ensure that Nigerian youths who studied outside the shores of Nigeria are not short-changed. 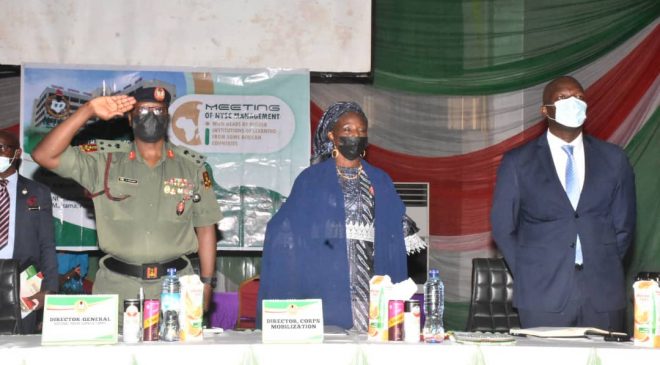 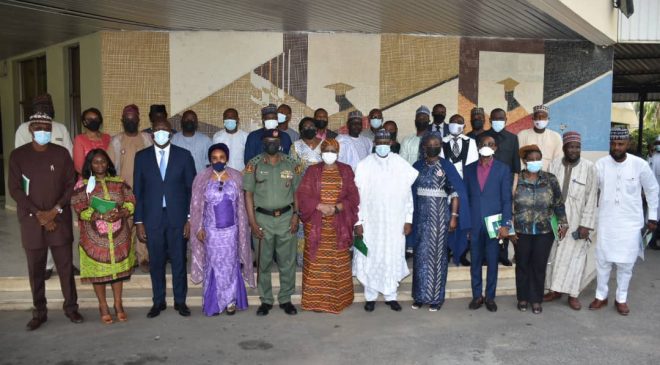 NYSC Director-General, Brigadier General Shuaibu Ibrahim stated this today. Tuesday 16th,2021 in Abuja, in his address at the second meeting with representatives of Corps Producing Institutions of some African Countries and other critical stakeholders in the mobilisation process.
He added that the meeting, which aimed at entrenching the culture of regular contact with universities and other higher institutions of learning as provided by the law establishing the Scheme would also sustain the gains recorded in the maiden edition of the meeting held two years ago.
Ibrahim decried the outright sale of degree certificates to persons who never saw the four walls of the university, adding that those category of persons were unable to communicate in English language or defend their qualifications.
“The vacuum which existed between the Scheme and foreign Corps Producing Institutions created by communication gap gave rise to some unimaginable  malpractices and irregularities on the part of the institutions, especially those within our neighbouring countries in West Africa.
“The most worrisome was the outright sale of degree certificates to persons who never saw the four walls of the university. The effect of such a development on our national life cycle can only be imagined”, the DG said.
Ibrahim stated further that the long-standing tradition of routine evaluation and review of the Scheme’s performances in the mobilisation process with its critical stakeholders in the country has given the hope that the Scheme is on the roadmap to success in the foreign segment of the mobilisation process.
The Director, Corps Mobilization department, Mrs Victoria Ango said constructive engagement and method of data collection has helped the NYSC to reduce irregularities and errors in the process.
She stated that challenges such as bogus number, diplomatic hurdles and other bottle-necks associated with establishing regular contact with foreign Corps Producing Institutions have remained unresolved for many years until recently.
Ango added that the Scheme would continue to explore the best method to maintain reliable contact with institutions yet to be reached.
“We will continue to address copious challenges in youth mobilisation for the sake of our regional growth and development of our  respective nation states”, she said.
In her goodwill address, the NYSC National Governing Board Chairman, Ambassador Fatima Balla Abubakar said the negative tendencies from unscrupulous persons attempting to illegally participate in National Service potends a grave danger if left unchecked.
She commended NYSC Management for conveying the meeting adding that the last meeting exposed some of the malpractices in some Corps Producing Institutions in the West African Sub-region.
There were goodwill messages from the Minister of the Federal Capital Territory, Abuja, Alhaji Muhammad Musa Bello, represented by the Director, Youth, Mrs Asabe Umar, while Mr Koli Salihu Mongodida represented the Minister of Education, Dr Dakwak Gloria, represented the Ministry of Foreign Affairs, and Mr Cisser Lepare Karim, First Consellor, represented the Ambassador of Cote de Voire..