The university don who was on a courtesy visit to Hon Abike Dabiri-Erewa office,  narrated the ordeal he went through in the hands of Ghanaian authorities through the University he served as well as the hostile media and harassment by the Ghanaian security agencies.

According to him, he went through serious ordeal from the University authorities in Ghana as he was  subjected to series of interrogations by the University of Education,  Winniba, Ghana.

“They said I was sacked, then dismissed, which was another wrong word to use, as you cannot dismiss some body on sabbatical in your country”

“As I speak with you , I have not received any letter of sack or dismissal whereas various factions of the letters are already in circulation in Ghana and on social media.

He, however,  commended the Nigerian High Commissioner in Ghana, Amb. Olufemi Abikoye for the wonderful role he played in the whole saga, especially with respect to his security in Ghana and prompt intervention.

“ But for him, I probably would have been a dead man” , he added

Nwagbara, a Professor of English, was in Ghana on a one-year sabbatical in December 2018 and a purported video of him addressing an informal meeting of Nigerians living in Ghana where he was quoted to have insulted Ghanaians, went viral.

Prof. Nwagbara said the doctored video was allegedly said to have been released by a Journalist working with a Ghanaian Private TV Station.

Receiving the Professor in  her office, Hon. Abike Dabiri-Erewa  said ” We are proud of you as one of our best brains. You are an asset to your country . Not surprising, you’ve received offers from other Universities to complete your sabbatical before returning to the University of Lagos .“

She said that over 500 Nigerians had been deported in controversial circumstances by Ghanaian  authorities in the last two years.

“We are not going to tolerate any country treating Nigerians shabbily .

“Our stand is that if a Nigerian commits a crime, other Nigerians should not suffer for that” She said.

She called for caution, and warned that such treatment should not be allowed to degenerate to the level of retaliation.

Dabiri-Erewa said there was need for mutual respect between Nigeria and Ghana as they are two brother nations.

The NIDCOM boss urged Ministries of Foreign Affairs to work out amicable ways of addressing these recurring challenges.

The Chairman also today received an Award for Excellence in Public and Humanitarian Services from the organizers of Asa Day festival Abuja, RoyalPrince Media Services. 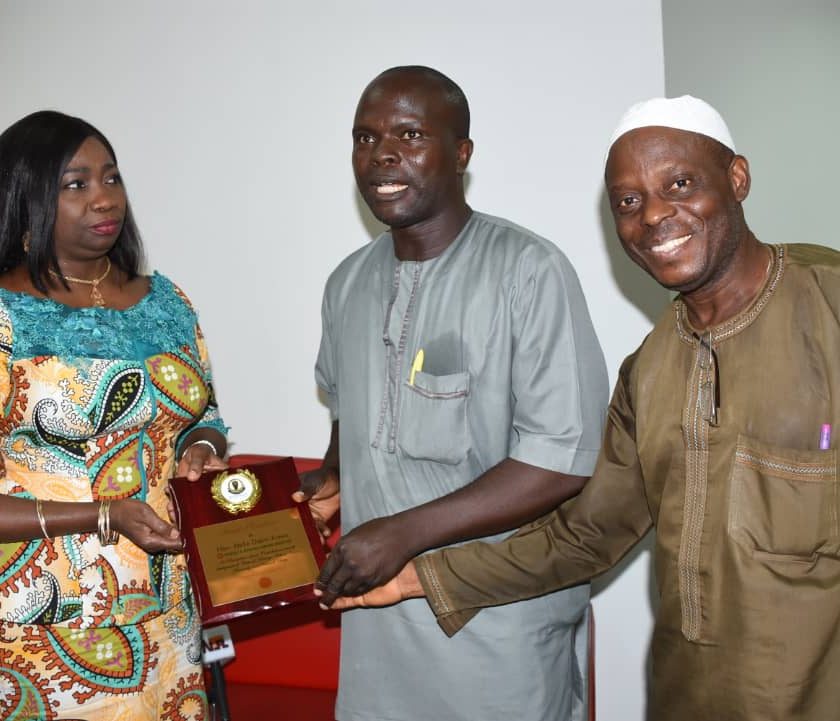 While presenting the Award the festival Coordinator, Comrade Babalola Lukman Laleye who was accompanied by a member of the festival committee, Chief Babalola Olatunbosun said the Award was in recognition of Hon.Abike Dabiri-Erewa contributions towards promotion of cultural heritage, ethical values and National unity .

Hon.Abike Dabiri-Erewa thanked the organizers for the honour.