Skip to content
You are here
Niger state Governor ,Abubakar Sani Bello felicitated with Nigerlites on the 45th year anniversary of the State’s creation from the defunct North Western State during the regime of General Murtala Ramat Muhammad.
In a release, Governor Sani Bello appreciated God for the appreciable growth and development recorded in the last forty five years of the State’s existence. 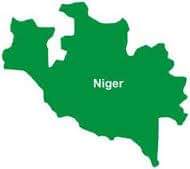 Governor Sani Bello who noted that the level of development in the State is not commensurate with its years of existence, explained that a lot is being done to add value to the contributions of successive administrations towards building a virile State.
On the security challenges, Governor Sani Bello said his administration has done a lot but will not relent until the issue of insecurity is addressed stressing that his administration is more than ever, determined to halt the insecurity challenges in the areas.
” The people in the affected parts of the State have suffered enormously due to the continued attacks by the bandits ,but I am not going to be deterred by that, government will step up its plans to end the insecurity”, he added
The Governor acknowledged the efforts of the traditional rulers and urged them to improve on the existing harmonious, peaceful coexistence in their domains as well as fish out enemies of the State who are serving as informants to the men of the underworld and advised them not to compromise in the discharge of their duties.
He then called for collective efforts noted that the task of governance was a collective responsibility which must not be left to government alone while assuring that Government will continue to formulate policies and programmes that will impact positively on the lives of the citizens.