Skip to content
You are here
Spread the love
Eminent Nigerians from different walks of life have lent their support to the establishment of NYSC Trust Fund as it would address infrastructural deficit in the Scheme, as well as provide start-up capital to Corps Members to establish their businesses after the completion of the service year.
This was part of the deliberations yesterday 25th October, 2021 at a symposium on the Imperatives of an NYSC Trust Fund, themed; “Consolidating the gains of the NYSC in Youth Empowerment and National Development in the Face of Current Economic Realities: The Imperatives of a Trust Fund”, held in Abuja. 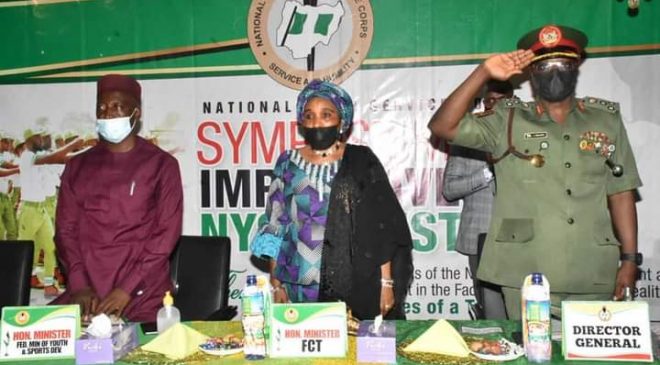 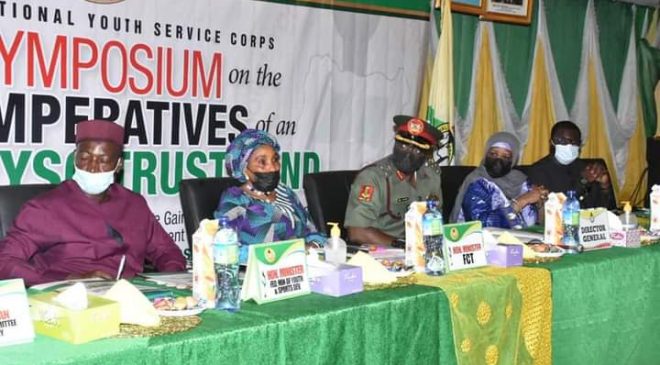 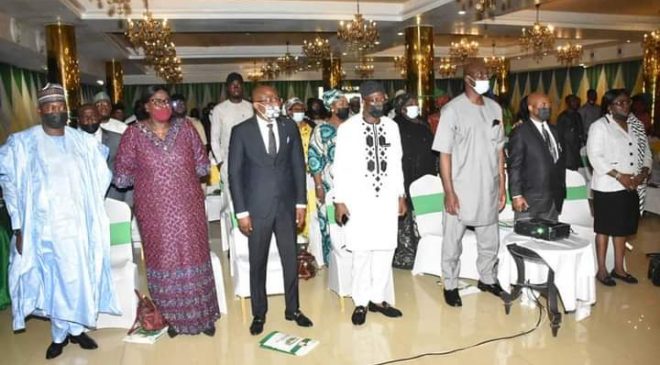 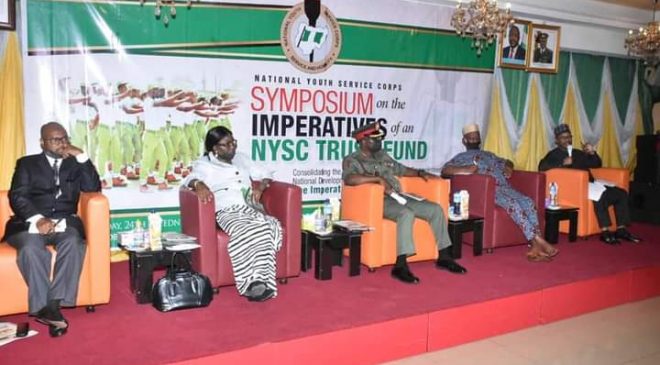 The FCT Minister, Alhaji Mohammed Musa Bello, while declaring the symposium open commended NYSC Management for rising to the occasion to address the challenges confronting the operations of the Scheme through the proposed trust fund.
Represented by the Director, Youth, Social Development Secretariat, FCDA, Abuja, Mrs Asabe Umar, the Minister said over the years, the realisation of the objectives for establishing the Scheme has been hampered by challenges such as inadequate funding, dearth of infrastructure and start-up capital for Corps Members trained under the NYSC Skill Acquisition and Entrepreneurship Development programme.
“The establishment of NYSC Trust Fund could not have come at a time better than now, owing to the fact that the NYSC has the capacity to drive Nigeria’s economic recovery process, especially through the empowerment of its teeming youth, given the budding talents at its disposal. It therefore behoves on all to support laudable initiatives such as this”, he said.
In his goodwill address, the Minister for Youth and Sports Development, Mr Sunday Dare, whose address was read by the Assistant Director, Youth Right and Leadership, Mr Despan Kwarben, said NYSC has lived up to the dreams and aspirations of its founding fathers, evidenced by the numerous achievements it has recorded in the last forty-eight years of existence.
He added that the establishment of NYSC Trust Fund will be a step in the right direction, as it is expected to bridge the financial deficit of the Scheme, enhance more funding for the existing NYSC Ventures, among others.
He said, “l wish to appreciate the intellectual friends of the NYSC for organising this symposium which is aimed at contributing their knowledge, experience and voice to this great cause.
“The symposium is indeed, the required platform that will fashion out concrete operational framework that will serve as a guide to the Scheme in its engagement with relevant stakeholders for the actualisation of the NYSC Trust Fund”.
The Minister reiterated Federal Government’s continuous support to the NYSC to enable it function optimally and become the leading light of youth organisations in Africa as envisioned by the founding fathers.
Earlier in his welcome address, the NYSC Director-General, Brigadier General Shuaibu lbrahim said the essence of the symposium is to engender greater appreciation of the imperative of an NYSC Trust Fund and also generate ideas that will facilitate its actualisation, as well as the realisation of the set objectives.
He added that the idea of the trust fund came up when management was deepening its search for ways of addressing the challenges faced by the Scheme.
Ibrahim hinted that the Federal Government bore the heaviest cost of running the Scheme through feeding, medical services for Corps Members and course officials during Orientation Course, provision of other logistics for Orientation and Post-Orientation operations, payment of Corps Members’ monthly allowances, payment of transport allowances, provision of Corps Members’ kit items, insurance of Corps Members, as well as Staff welfare and training among others.
He further stated that section 7, Sub-Sections 3 and 4, including Section 8 of the NYSC Act saddles States and Local Governments with complimentary responsibilities such as the provision of befitting Orientation Camps, accommodation for Corps Members, office accommodation for NYSC State Secretariats, as well as Zonal and Local Government Offices.
Other responsibilities according to General Ibrahim included; the provision of land for agriculture, release of state subventions, security of Corps Members and support for the Scheme’s Community Development
Service.
The Director-General also stated that the exponential rise in Corps population has brought the demand for commensurate allocation of resources.
“I have made sustained advocacy engagement with stakeholders as part of my policy thrust.
“We convened a meeting of the NYSC Top Management with representatives of State Governments, Federal Capital Territory Administration and the Association of Local Governments of Nigeria in 2019 and 2021.
“Part of the resolutions of the 2021 meeting is the proposal for the establishment of a dedicated fund that will be backed by law to complement resource allocation from the three tiers of Government.
“The fund, which will be called the NYSC Trust Fund is expected to strengthen the operations of the Scheme in the same manner the Tertiary Education Trust Fund, the Police Equipment Trust Fund and the Petroleum Technology Development Trust Fund aid the operations of tertiary educational institutions, the Nigeria Police as well as the oil and gas industry respectively”, the Director-General added.
Speaking further, the NYSC boss said when operational, the NYSCTF will help address infrastructural and other logistic needs for the smooth operations of the NYSC Scheme while resources from the fund will support staff training for higher productivity as well as logistic requirements for special aspects of Community Development Service such as the medical outreaches conducted under the Health Initiative for Rural Dwellers (HIRD).
“At this juncture, l wish to appeal for the support of all stakeholders towards actualizing the NYSC Trust Fund.
“As Managers of the Scheme, we wish to assure the Federal Government and the public that such a laudable initiative will be justified through greater commitment to the success of the NYSC mandate”, Ibrahim said.
There were goodwill messages from the Chairrman, House Committee on Youth, Hon. Yemi Adaramodu, Chairman, NYSC National Governing Board, Ambassador Fatima Balla Abubakar among others.