Much of the global market in 2019 has been driven by trade wars between the United States and The Peoples Republic of China. President Donald Trump signed an executive order that no US company should use telecommunications equipment made by technology companies that pose national security risks.

The ban was targeted at Huawei, the Chinese tech company leading 5G revolution in Asia. Experts say the US may lose as much as $500 billion, if China beats America to the best 5G technology — highlighting how important 5G will be in the years ahead. The countries that lead the 5G revolution will earn billions of dollars, and greatly improve their economies, and drive global change — one of such countries is the United Kingdom.

According to Nicola Sturgeon, the first woman to become the first minister of Scotland, the country is aiming to be the 5G leader in the United Kingdom. She says 5G could enable Scotland to add about £17 billion to GDP by 2035 and create 160,000 jobs.

At the heart of Scotland’s 5G revolution is Nigeria’s Yusuf Abudulrahmam Sambo!

WHO IS YUSUF SAMBO?

Yusuf Abdulrahman Sambo is a research associate and the 5G-SON (self-organised network) testbed lead at the University of Glasgow, UK. Sambo was born in 1988 in Kaduna. He hails from Ikara local government, Kaduna state.

He is the son of Abdulrahman Sambo, former acting executive secretary of the National Health Insurance Scheme (NHIS).

The building blocks of his sterling career were laid at Command Children School, Abuja, where he had his primary education, and Zaria Academy, Shika, where he learnt at the secondary education level. He would go on to Ahmadu Bello University (ABU) Zaria, where he graduated in 2010 with a second-class upper degree in electrical engineering.

By 2011, a year after graduating from ABU, Sambo already completed his master’s degree in Mobile and Satellite Communications at the University of Surrey (with distinction and two publications).

Born to a medical doctor, who remains his role model, Sambo says his love for IT was encouraged by his father, who introduced him to the power of information and communications technology at a very young age.

Sambo says his father, despite being a medical doctor by training, proofreads all his tech papers, and has always been interested in all he is research and academic works. 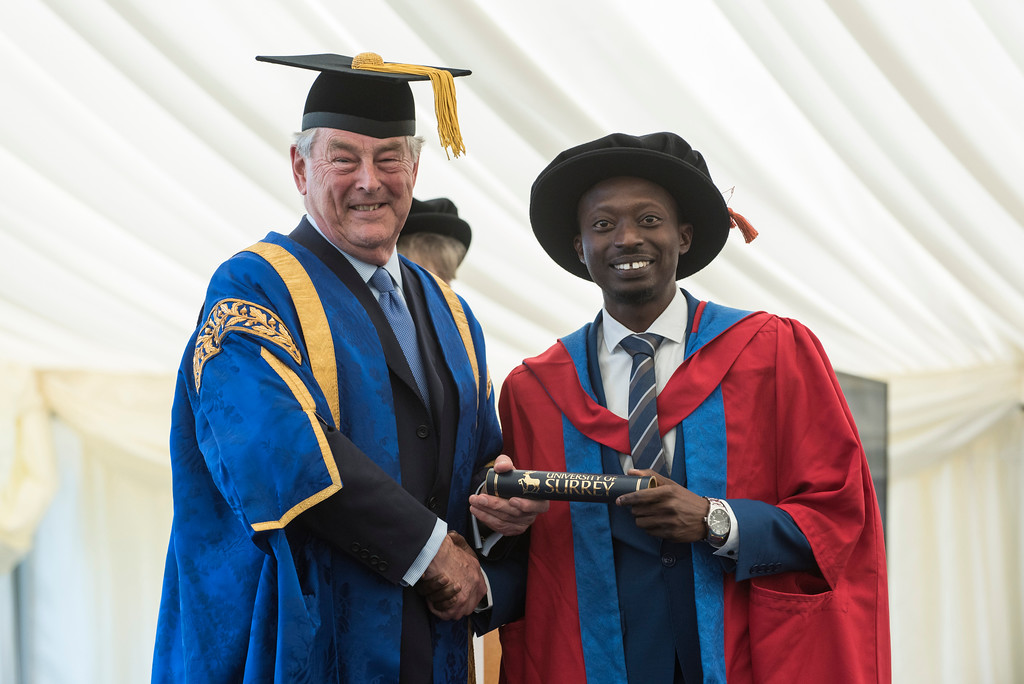 Sambo completed his Ph.D. at 27

Following a distinct result during his masters at Surrey, Sambo got a full Ph.D. scholarship to work on a European Union-funded project on designing low electromagnetic emission future networks. He took the offer and started the Ph.D.

But like everything with the golden fish, there is no hiding place; during his first year of Ph.D., he secured a mobility funding, to conduct research on mobile communications at the Texas A&M University in Qatar.

At the age of 27, he completed his Ph.D. in Mobile Communications from the 5G Innovation Centre, reputed as the world’s largest academic research centre dedicated to next-generation mobile and wireless connectivity, at the University of Surrey in 2016.

Sambo has since tapped into the centre’s vision to drive the fourth industrial revolution “to enable a world where everything is provided wirelessly to the end device by a fixed and mobile (converged) infrastructure that functions across the whole geography”. The internet of things!

QUICKFACT: 5G could make it possible for a surgeon in India to carry out an operation on a patient in Australia or anywhere else in the world. It promises unbelievable medical advancements. 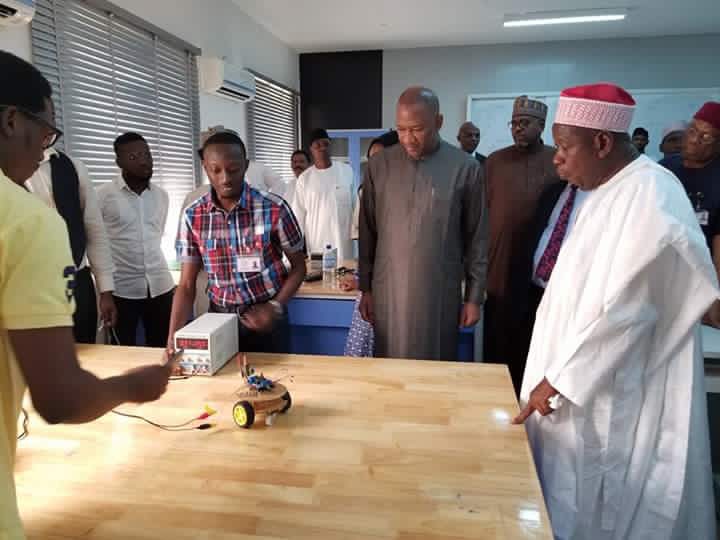 Despite being able to thrive anywhere in the world, Sambo returned to Nigeria upon graduation from Surrey, to transfer knowledge and give back to the Nigerian system. He worked briefly as a network engineer at Suburban Telecoms.

He also lectured at Baze University, Abuja, between July 2016 and August 2017. He taught three modules to undergraduate students at the university, and would later become a supervisor of the Electrical Engineering Department at the university in Nigeria’s capital.

His students made a Bluetooth controlled rover (picture above), which was demonstrated when Abdullahi Ganduje, governor of Kano state, visited the university.

While at Baze, he co-founded Baze Youth Forum, a gathering for progressive youths to share ideas on issues of common interest. During this period, he also joined Fleissen & Company, an independent research and consulting company, as a consultant and worked on several projects.

He has designed and built the first real-time 5G testbed dedicated to Self-Organised Networks (SON) in the UK which runs on general-purpose processors.

At Glasgow, he has also produced several proofs-of-concept and demonstrated various 5G use-cases including a prototype for the world’s first popup network that can be deployed in less than 2 minutes for emergency communications and rural connectivity.

His works have also made it possible to dynamically switch on/off 5G small cells by using machine learning for traffic prediction and multi-sensor fusion that result in over 20 percent energy savings.

Following his array of excellent ideas and implementation, he was awarded the coveted Engineering and Physical Sciences Research Council (EPSRC) Impact Acceleration Account (IAA) grant for research on novel cooling systems capable of reducing the energy consumption of 5G networks by up to 50 percent.

QUICKFACT: With 5G, you can download your favourite HD movie in f-o-u-r seconds!

Sambo next to Sturgeon, who shows off the world’s first book on verticals of 5G…

The 31-year-old co-edited the world’s first books on the verticals of 5G and EMF radiation from future wireless communication, published by the prestigious Wiley-IEEE and the IET, respectively in 2019.

In September 2018, the tech guru was engaged in an EPSRC-IAA funded research mobility to the University of Electronic Science and Technology of China to work on 5G testbed design.

He leads the University of Glasgow research team on the widely-celebrated Department for Digital, Culture, Media and Sport (DCMS)-funded 5G RuralFirst project. The project focuses on implementing a pop-up network for a healthcare use case in the Orkney Islands, Scotland.

He recently coordinated a demo for the first minister of Scotland to showcase the research and successes of his team’s 5G plan. This was widely reported in the British media, including coverage by the BBC, STV, the Scotsman, Daily Record, the Herald and the Daily Mail.

When he is not revolutionalising 5G networks, he is supporting Arsenal Football Club, playing squash or traveling. Sambo says he loves food and is strangely a pen collector — he has about 100 pens from random places.