I’ve been away from my base since Dec. 24 and have only had sporadic access to social media. But I’m aware that defenders of Buhari’s fascist regime are having a feeding frenzy over a screenshot of a Feb. 23, 2019 Facebook status update on Dasuki’s alleged death that I deleted within minutes of posting. I’ve already shared the recorded phone conversation that informed my update, but I still need to make a few points, not to convince inveterate worshippers and defenders of Buhari but for the records.

The recorded phone conversation in which someone said Dasuki had died because he had been denied access to his medications and that the Buhari regime was hiding news of his death because of the election had been wildly shared on the Hausaphone WhatsApp sphere—and on some websites—before it got to me.

I received it on WhatsApp from at least 10 people, but I only took it seriously when someone who had shared reliable information with me in the past also shared it with me. He told me one of the people in the recorded phone chat was his colleague in the intelligence services.

Within minutes of sharing it on Facebook, Dasuki’s family friend and biographer Yushau Shaibu told me it wasn’t true. So I took it down and made another status update to clarify why I had taken it down. (See the screenshot of my clarification). But Buhari apologists who monitor my social media feeds like monitoring spirits took a screenshot of the first update before I deleted it and, of course, ignored the subsequent one where I disclaimed the earlier one.

Now, here are the issues. In journalism, you can never always get it right the first time. Dan Rather, one of America’s most accomplished journalists, fell for inauthentic documents that claimed George W Bush received preferential treatment at the Texas Air National Guard in 1972–73 because of his father’s influence. He apologized and retracted the story after the documents were found to be entirely false.

Even Washington Post’s reporting of the famous Watergate scandal (from where every scandal is now suffixed with a “gate”) had series of what people would have called “fake news” today. Some sources lied to and misled Bob Woodward and Carl Bernstein, and the Nixon admin seized on this to call the entire reporting of the scandal into question. At a point, Washington Post editor Ben Bradlee wanted to withdraw the reporters from the story. But the Washington Post was mostly accurate, and it brought down Nixon. 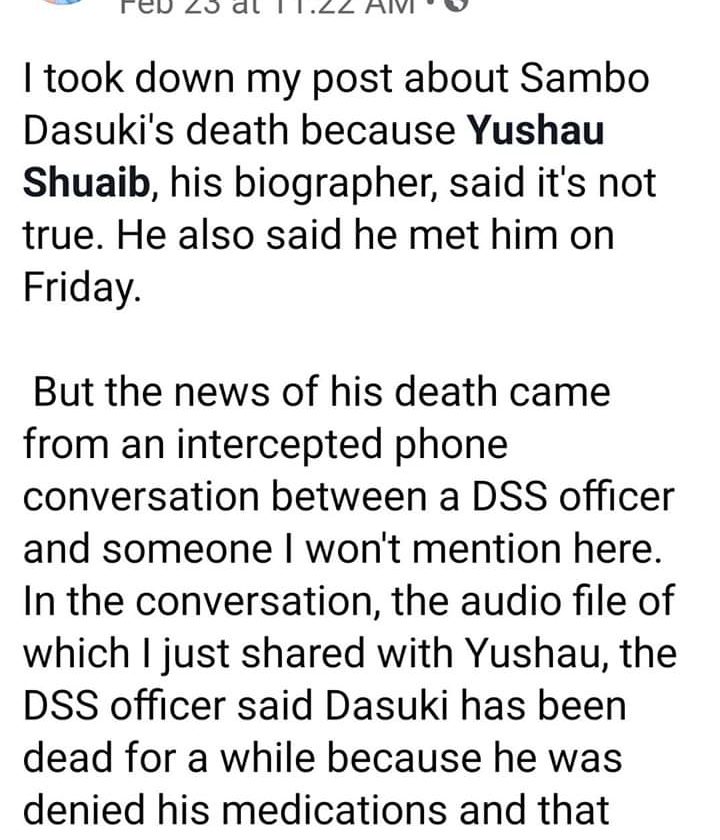 That’s why we say journalism is only the first rough draft of history. Others say it’s history in a hurry. Carl Bernstein famously characterized it as only “the best obtainable version of the truth.”

Like other ethical journalists, when a piece of information I share is not true, I say so. But these are few. All other bits of information I’ve shared about the Buhari regime’s moral putrefaction are accurate. Here’s a partial list:

1. I was the first person to expose the existence of the Buhari Media Center (BMC). They initially said it was “fake news.” Now they admit it exists and have even incorporated beneficiaries of N-Power into the pro-regime troll factory.

2. The memo instructing the police to extend the tenure of Buhari’s nephew is true. Even the Punch and ICIR verified it.

3.The memo instructing the posting of senior DSS officers to Ilorin to rig the last election is accurate.

4. The exposé on the names of Buhari’s relatives serving in his government is true.

5. The screening of ministers after Senate confirmation, instead of the other way around, is true.

6. The auctioning of ministerial appointments to the highest bidders is true. Many people have confirmed it.

7. The meeting with youth leaders in Aso Rock to attack anti-regime protesters is accurate.

8. Buhari’s personal call to ask that Danjuma Goje be let off his fraud trial as a compensation for not running against Lawan for the Senate Presidency is wholly true.

The list is endless. Several people within and outside the regime who fear that giving information to the domestic media would endanger their lives reach out to me daily. When I can verify their information, I share it.

One or two slip-ups, which I publicly rectified within minutes, don’t change these facts. I will never intentionally tell a lie. Never.