Skip to content
You are here
Spread the love
The Lagos Chapter of the Young Patriots’ Association of Nigeria (YPAN) held her inaugural election to elect into various executive position in all senatorial districts of Lagos state..
The e-election held on Sunday 23rd of August, 2020 was keenly contested by a number of candidates who were nominated by members of the association from all the local government that made up each Senatorial District; Lagos West, Lagos Central, and Lagos East. 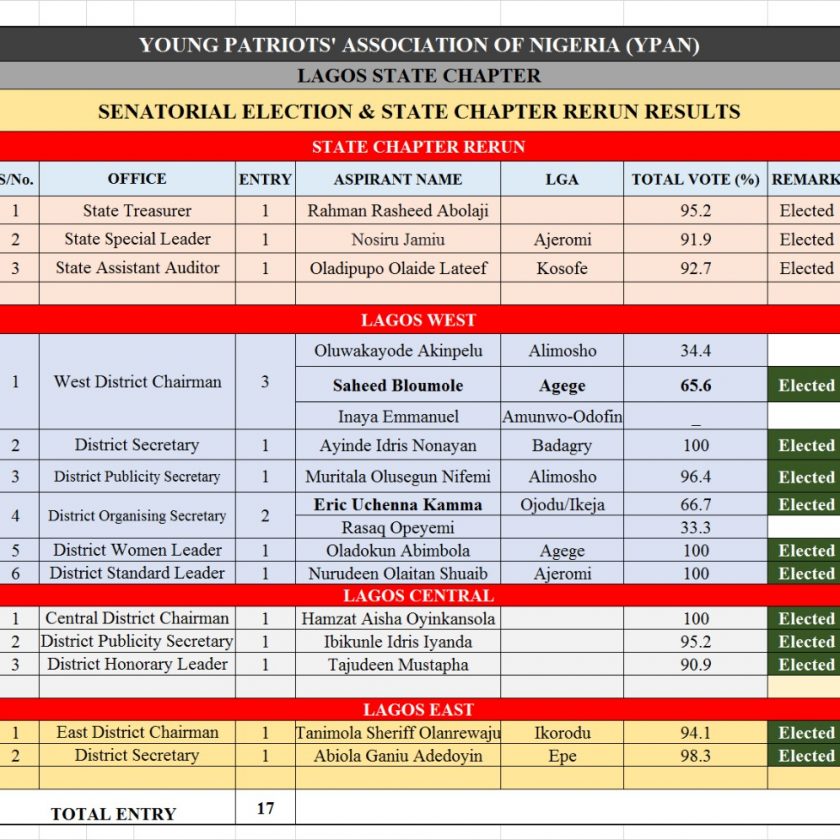 The election results was earlier announced by the electoral committee led by Hon. David Ayo Babalola who is also South Coordinator of YPAN.
In his remarks ,Babalola commended YPAN members and contestants for believing in the process and urged those that emerged to deliver as demanded by the YPAN constitution.
“The YPAN national leadership, board of Trustee, Lagos executive members and the screening committee appreciate all for being steadfast and believing in the process that took us up until this point. To those who have been voted into various offices; this is a challenge to deliver on your given mandate and tenaciously uphold the constitution of YPAN.”
The results of the election were as  follows:
LAGOS WEST
1. District Chairman – Saheed Bolumole
2. District Secretary – Ayinde Idris Nonayan
3. District Publicity Secretary – Muritala Olusegun Nifemi
4. District Organising Secretary – Eric Uchenna Kanma
5. District Women Leader – Oladokun Abimbola
6. District Standard Leader – Nurudeen Shuaib Olaitan.
LAGOS CENTRAL
1. District Chairman – Hamzat Aisha Oyinkansola
2. District Publicity Secretary – Ibikunle Idris Iyanda
3. District Honorary Leader – Tajudeen Mustapha
LAGOS EAST
1. District Chairman – Tanimola Sheriff Olanrewaju
2. District Secretary – Abiola Ganiu Adedoyin
In a related development, bye-election was conducted along the districts to fill vacant offices at the state executive council.
Rahman Rasheed Bolaji was voted as the State Treasure, Oladipupo Olaide Lateef emerged as State Auditor while Nosiru Jamiu was elected as the State Special Leader.
At the end of the poll, the Lagos State Chairman/Coordinator, Comrade Sheriff Abiola Maku via virtual platform thanked all contestants,said “As far as we are concerned, the election has produced winners alone as we do not believe in negatives. Either you emerge as winners or otherwise, we are all winners.”