The Honourable Minister of Communications and Digital Economy, Prof. Isa Ali Ibrahim (Pantami), has commended all the agencies in the communications and digital economy sector for being dedicated to the implementation of the National Digital Economy Policy and Strategy (NDEPS) 2020-2030, and urged them to work collaboratively and co-ordinately in order to achieve the Federal Government’s strategic objectives as articulated in NDEPS.

Pantami stated this at a retreat organised by Federal Ministry of Communications and Digital Economy (FMoCDE) for senior management staff of the Ministry and all its agencies which commenced on March 31, 2022. The retreat was convened to evaluate the implementation of NDEPS in the context of what has been achieved, what needs to be achieved, and what processes should be emplaced to enhance the capacity of the Ministry and Agencies it superintends to mobilise all stakeholders to accomplish the objectives of NDEPS. The retreat took place at the Nigerian Army Officers Wives’ Association (NAOWA) Centre at Mambilla Barracks, Abuja. 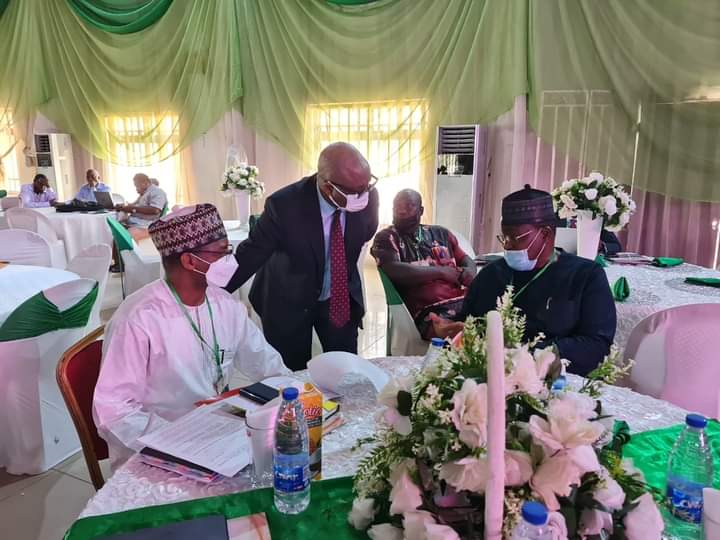 Citing the most recent report of the World Economic Forum (WEF), the Minister in his keynote and opening address told the forum that synergy among stakeholders in terms of co-operative posture, collaboration, coordination, deployment of social skills such as good listening skills, critical and analytical thinking, emotional intelligence, as well as project management and quality assurance skills, are central to organisational effectiveness, successes and the future of work, as projected by WEF. Pantami then urged all the agencies and their staff to challenge themselves to do more rather than think of themselves as competitors.

Also speaking at the retreat, the Executive Vice Chairman and Chief Executive Officer (EVC/CEO) of the Nigerian Communications Commission (NCC), Prof. Umar Danbatta asserted that the NCC has acted superlatively in implementing NDEPS and in the context of the vision of Federal Government and the supervision of the Ministry. Danbatta who made clearly methodical presentation that chronologically documented NCC accomplishments under each of the eight (8) pillars of NDEPS, cited 10 of the 16 regulations that have been instituted in giving expression to Governments vision on developmental regulation, which is the first pillar of NDEPS.

These regulations were focused on Enforcement Processes, Lawful Interception, Quality of Service, Competition Practices, Licensing Regulations, and Universal Access and Universal Service among others.

Danbatta promised to also complete the review of the remaining soonest and activate their implementation. Danbatta, who used a triangulation method in contextualising the achievement of NCC under the first pillar, itemised the guidelines, regulations and policy development initiatives to discharge the burden of proof of NCC’s effectiveness in the regulation of ICT and digital economy sector through approaches that enabled development.

In implementing Digital Literacy and Skills, the second pillar, Danbatta also stated in his clearly explanatory presentation, that the Digital Bridge Institute (DBI), set up by NCC in 2004, had trained 5,352 students through 49 institutions, provided educational training software to 398 secondary schools, and endowed 7 professorial chairs in various Nigerian universities across all the geopolitical zones.

On Solid Infrastructure, the third pillar of NDEPS, Danbatta stated that broadband penetration as at December 2021 was 40.88 percent, thus enabling 80 million Nigerians to have access to broadband services.

To reinforce the intensity of NCC’s commitment to improving broadband penetration, the EVC declared to the forum that NCC has emplaced a process for the deployment of optic fibre cable using Infrastructure Companies (Infracos). Danbatta was emphatic that the licensed Infracos have been directed by the Commission to commence immediate roll out without recourse to counterpart funding because the licence issued to them was independent of the counterpart funding agreement. The Infracos are expected to lay 38,296Km of fibre optic cable. Also, in keeping with Government’s directive through a Federal Executive Council decision of 2005, NCC has constructed 32 Emergency Communication Centres (EECs) in various states, and 32 of those have been activated and are operational. Prof. Danbatta also documented copiously in his presentation, Commission’s achievement in the other five pillar areas.

Dr. Armstrong Takang, an innovative and technology-for-development specialist, who presented the lead paper as guest speaker, praised the Federal Government for concretely aligning ICT, and digital economy with national economic imperatives. Additionally, he commended NCC for driving the necessary infrastructure purposely and strategically, and for its effectiveness in regulating the telecom sector.

Takang, cited Lagos State and the Federal Capital Territory Administration as good models, Takang emphasised the correlates of adoption of technology or automation in economic growth and effective governance, crediting technology for improved internally-generated revenue in Lagos State. Takang recommended that Nigeria must link technology to specific programmes that are impacting and sustainable. He also asserted that Nigeria needs to undertake pilots for projects that are planned for implementation and utilise the results of the pilots to scale up and for budgeting. Takang also bemoaned the human capital challenge in the ICT sector in Nigeria, insisting that at least 500,000 software engineers are required to redirect efforts for effectiveness of policy.